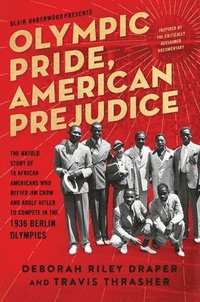 av Deborah Riley Draper, Blair Underwood, Travis Thrasher
Inbunden Engelska, 2020-02-06
239
Köp
Spara som favorit
Skickas inom 5-8 vardagar.
Gratis frakt inom Sverige över 159 kr för privatpersoner.
Finns även som
Visa alla 2 format & utgåvor
Discover the astonishing, inspirational, and largely unknown true story of the eighteen African American athletes who competed in the 1936 Berlin Olympic Games, defying the racism of both Nazi Germany and the Jim Crow South. Set against the turbulent backdrop of a segregated United States, sixteen black men and two black women are torn between boycotting the Olympic Games in Nazi Germany or participating. If they go, they would represent a country that considered them second-class citizens and would compete amid a strong undercurrent of Aryan superiority that considered them inferior. Yet, if they stayed, would they ever have a chance to prove them wrong on a global stage? To be better than anyone ever expected? Five athletes, full of discipline and heart, guide readers through this harrowing and inspiring journey. There's a young and sometimes feisty Tidye Pickett from Chicago, whose lithe speed makes her the first African American woman to compete in the Olympic Games; a quiet Louise Stokes from Malden, Massachusetts, who breaks records across the Northeast with humble beginnings training on railroad tracks. We find Mack Robinson in Pasadena, California, setting an example for his younger brother, Jackie Robinson; and the unlikely competitor Archie Williams, a lanky book-smart teen in Oakland takes home a gold medal. Then there's Ralph Metcalfe, born in Atlanta and raised in Chicago, who becomes the wise and fierce big brother of the group. Drawing on over five years of research, Draper and Thrasher bring to life a timely story of perseverance and the will to beat unsurmountable odds. From burning crosses set on the Robinsons's lawn to a Pennsylvania small town on fire with praise and parades when the athletes return from Berlin, Olympic Pride, American Prejudice is full of emotion, grit, political upheaval, and the American dream. Capturing a powerful and untold chapter of history, the narrative is also a celebration of the courage, commitment, and accomplishments of these talented athletes and their impact on race, sports and inclusion around the world.
Visa hela texten

"Olympic Pride, American Prejudice sprints and soars as the story of these unforgettable athletes takes readers on a gripping moral journey and a by-the-second, heart-pounding race of grace and grit. It is at once powerful and tender, as the athletes emerge as champions in the face of Hitler and the Jim Crow South. Ever timely, Olympic Pride, American Prejudice is a must-read for anyone concerned with race, sports, and politics in America." -WILLIAM C. RHODEN, columnist, writer at large for ESPN's The Undefeated, and New York Times bestselling author of Forty Million Dollar Slaves: The Rise, Fall, and Redemption of the Black Athlete "Olympic Pride, American Prejudice is a marvel of perseverance and inspiration. Deborah Riley Draper, Travis Thrasher, and Blair Underwood have done the world a favor by bringing into the sunlight the unknown story of eighteen black Olympians who should never be forgotten. This book is both beautiful and wrenching, and essential to understanding the rich history of African American athletes." -KEVIN MERIDA, editor in chief of ESPN's The Undefeated "Cutting across disciplines, this stirring remembrance of athletes who have long been overshadowed will resonate with anyone interested in the Olympics or the history of civil rights." -PUBLISHERS WEEKLY

Deborah Riley Draper is an award-winning director and writer known for the films Versailles '73: American Runway Revolution and 2017 NAACP Image Award nominee Olympic Pride, American Prejudice. In 2016, Variety named her one of 10 Documakers to Watch. In 2019, Draper penned the screen adaptation for the upcoming film Coffee Will Make You Black. Two-time Golden Globe nominee and Emmy, Grammy, and seven-time NAACP Image Award recipient Blair Underwood has distinguished himself as an award-winning actor, director, and producer. He has starred in Sex in the City, Self Made: Inspired by the Life of Madam C.J. Walker, and Disney Channel's The Lion Guard. He lives in Los Angeles, California. Follow him on Twitter at @BlairUnderwood. Bestselling author Travis Thrasher has written over fifty books and worked in the publishing industry for more than twenty years. His inspirational stories have included collaborations with filmmakers, musicians, athletes, and pastors. He has written fiction in a variety of genres, from love stories and supernatural thrillers to young adult series. He also has cowritten memoirs and self-help books.