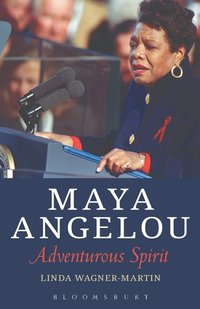 av Linda Wagner-Martin
Häftad Engelska, 2015-11-19
259
Köp
Spara som favorit
Skickas inom 10-15 vardagar.
Fri frakt inom Sverige för privatpersoner.
Finns även som
Visa alla 3 format & utgåvor
A comprehensive biographical and critical reading of the works of American poet and memoirist Maya Angelou (1928-2014). Linda Wagner-Martin covers all six of Angelou's autobiographies, as well as her essay and poetry collections, while also exploring Angelou's life as an African American in the United States, her career as stage and film performer, her thoughtful participation in the Civil Rights actions of the 1960s, and her travels abroad in Egypt, Africa, and Europe. In her discussion of Angelou's methods of writing her stunning autobiography, which began with the 1970 publication of I Know Why the Caged Bird Sings, Wagner-Martin writes about the influences of the Harlem Writers Group (led by James Baldwin, Paule Marshall, and John O. Killens) as well as Angelou's significant friendships with Malcolm X, Martin Luther King, Jr., and other leaders from both international and African American United States cultures. Crucial concepts throughout include the role of oral traditions, of song and dance, of the spiritualism of art based on religious belief, of Angelou's voiced rhythms and her polished use of dialogue to convey more abstract "meaning." Wagner-Martin shows that, viewing herself as a global citizen, Angelou never lost her spirit of adventure and discovery as well as her ability to overcome.
Visa hela texten

This book offers an accessible, clear biography of the highly acclaimed poet, essayist, memoirist, educator, and civil rights activist. Refreshingly unburdened by footnotes and theoretical digressions, the book applies a wide-angle lens to Angelou's life and provides a sweeping view of the woman and her works. The approach is nonetheless scholarly: Wagner-Martin (Univ. of North Carolina, Chapel Hill) frames her discussion of Angelou's life with other critics' viewpoints and emphasizes Angelou's influence on the larger literary world. The book is as much a biography of Angelou's writings as it is a biography of the woman. Wagner-Martin smartly anchors her study in Angelou's six autobiographies, beginning with I Know Why the Caged Bird Sings-thus highlighting for readers her subject's growth as an author. Wagner-Martin even posits that Angelou's poetry gives insight into her love life. She also provides an analysis of some of Angelou's essays and her important work as a civil rights activist. The book includes a useful bibliography of primary sources -poems, autobiographies, essays, spoken-word albums, children's books, screenplays, and so on-as well as a comprehensive bibliography of secondary sources. Summing Up: Essential. Lower-division undergraduates through faculty; general readers. * CHOICE (named a CHOICE Outstanding Academic Title) * Maya Angelou: Adventurous Spirit is a perfectly timed, must-have volume for any reader interested in the life and work of the writer, activist, campaigner and performer Maya Angelou. In a vivacious and accessible study, eminent scholar Linda Wagner-Martin combines biography and literary criticism, spanning Angelou's first book to her final publication in 2014 - a poem on the death of Nelson Mandela. Wagner-Martin considers Angelou's life as an African American in the US, her life as stage and film performer, her full involvement in the Civil Rights actions of the 1960s and her travels abroad in Egypt, Africa and Europe alongside her literary career, recognizing Angelou's dexterous maneuvering of genre. In a manner befitting its subject, Maya Angelou: Adventurous Spirit achieves that rare balance: incisive, scholarly, well-researched, but also immensely enjoyable to read. * Laura Rattray, Reader in American Literature, University of Glasgow, UK * Kudos to Linda Wagner-Martin, one of our most esteemed literary critics, for her superb scholarship in Maya Angelou: Adventurous Spirit. This accessible and deeply engaging study launches a new era in the assessment of a very important author and world-changing woman. * Hilary Holladay, Author of Wild Blessings: The Poetry of Lucille Clifton * This engaging study brings much-needed scholarly attention to Maya Angelou's memoirs and poetry and shows how Angelou's political involvement and time in Africa inform her writing. Linda Wagner-Martin's interest in the use of language mirrors Angelou's own and highlights the unities in Angelou's wide-ranging career. * Kelly L. Reames, Associate Professor of English, Western Kentucky University, USA * The greatest contribution of Maya Angelou is the seriousness with which it takes Angelou as a writer ... for Angelou's reputation as a writer is often dwarfed by her reputation as inspirational public figure and a cosmopolitan woman of the world ... [Wagner-Martin] reminds us that Angelou first came to public attention as an original literary voice, telling a story that had not been told: that of an impoverished, brainy black girl in a world that did not wish to see poverty and saw no value in the life of a black girl child. Wagner-Martin's contextualization and explication of that first memoir, I Know Why the Caged Bird Sings, is extraordinary ... Maya Angelou: Adventurous Spirit is an important early contribution to studies of Angelou's life and writing. By focusing on the literary Angelou, it reminds us that she first came to our attention as a writer of compelling prose and a gifted storyteller who wrote her w

Linda Wagner-Martin is Hanes Professor of English and Comparative Literature at The University of North Carolina at Chapel Hill, USA. She was the 2011 recipient of the Hubbell Medal for lifetime service in American literature (sponsored by the MLA), and has received the Guggenheim fellowship, the senior National Endowment for the Humanities fellowship, the Bunting Institute fellowship, and awards from the Rockefeller Foundation, the American Philosophical Association and others. She has published more than fifty-five books of criticism, some edited, including Sylvia Plath: A Biography (1987) and "Favored Strangers": Gertrude Stein and Her Family (1995), as well as studies of Ernest Hemingway, Zelda Fitzgerald, Barbara Kingsolver, and others. Recent books are A History of American Literature from 1950 to the Present (2013) and Toni Morrison and the Maternal (2014).

List of Illustrations Acknowledgements Preface Chapter One: Marguerite Annie Johnson, April 4, 1928 Chapter Two: Ambivalence Is Not So Easy Chapter Three: I Know Why the Caged Bird Sings Chapter Four: Gather Together in My Name Chapter Five: Music, Poetry, and Being Alive Chapter Six: Singin' and Swingin' and Gettin' Merry Like Christmas Chapter Seven: The Heart of a Woman Chapter Eight: Africa Chapter Nine: A Song Flung Up to Heaven Chapter Ten: Poems and the Public Spotlight Chapter Eleven: From Autobiography to the Essay Chapter Twelve: Maya Angelou as Spirit Leader Primary and Secondary Bibliography Index