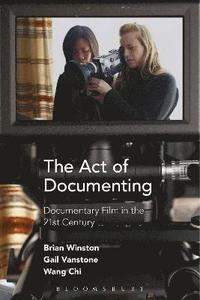 The Act of Documenting

Documentary Film in the 21st Century

av Brian Winston, Dr Gail Vanstone, Wang Chi
Inbunden Engelska, 2017-01-26
1279
Köp
Spara som favorit
Skickas inom 10-15 vardagar.
Fri frakt inom Sverige för privatpersoner.
Finns även som
Visa alla 3 format & utgåvor
Documentary has never attracted such audiences, never been produced with such ease from so many corners of the globe, never embraced such variety of expression. The very distinctions between the filmed, the filmer and the spectator are being dissolved. The Act of Documenting addresses what this means for documentary's 21st century position as a genus in the "class" cinema; for its foundations as, primarily, a scientistic, eurocentric and patriarchal discourse; for its future in a world where assumptions of photographic image integrity cannot be sustained. Unpacked are distinctions between performance and performativy and between different levels of interaction, linearity and hypertextuality, engagement and impact, ethics and conditions of reception. Winston, Vanstone and Wang Chi explore and celebrate documentary's potentials in the digital age.
Visa hela texten

The Act of Documenting is a first work of its kind (barring anthologies) that I have come across in the last five years that eclectically distills scholarship in ... [multiple] areas to effectively map and analyze the field of contemporary documentary studies. * Rahul Mukherjee, Film Quarterly * Fiercely argued, urgently rendered, and rigorously researched, The Act of Documenting whacks through the ethical, political, moral, evidentiary, and argumentative acts undergirding documentary production and reception. This gutsy, vital book cuts to the core of documentary: it interrogates the place of documentary in the world and how it engages people and ideas in ways that truly matter. Moving adroitly between the histories of analog documentary and the promising landscapes of digital forms, this substantial, sage book irrefutably shows that ethics, politics, and philosophical inquiry override formats, interfaces, and technologies. Polemical yet lyrical, forceful yet inviting, this book leaves the reader exhilarated with new ways of thinking about and through documentary. The opening chapter precis could be assembled as an intellectual toolkit for all us in the act of documentary-theorists, historians, practitioners, programmers, or offered as a manifesto cracking open the most salient issues demanding our attention and action. * Patricia R. Zimmermann, Professor of Screen Studies, Ithaca College, USA * By shifting emphasis from the category of documentary to the diverse practices of documenting, Winston and his co-authors exchange the generic preoccupations of many past approaches for a more open exploration of what is going on audio-visually around 'the real'. Their provocative appraisal takes our understanding of international media culture to new places. * John Corner, Visiting Professor in Communication Studies, University of Leeds, UK * Recognising that documentary, or 'documedia' as the authors' prefer, is on new terrain in the digital 21st Century, this book offers up fresh ideas that we will be debating in classrooms, in conferences, and in films and online for decades to come. Taking seriously, and at times, seriously debunking, the claims of documentary's new challenges and affordances in the 21st Century, The Act of Documenting offers a fresh perspective on this dynamic and ever-changing thing we still call (for better or worse) documentary. * Alisa Lebow, Producer/Director of Filming Revolution, University of Sussex, UK * The Act of Documenting, by Brian Winston, Gail Vanstone, and Wang Chi, is an elegantly argued, complex investigation of the ethics of each phase of documentary media making. It is in this context that they take on the ethics of The Act of Killing. Once I found that they would implicitly challenge even the ethics of my relation to my subjects (not villains but people I admire) in my own media making, the whole book became totally engrossing. -- Julia Lesage, Professor Emerita, University of Oregon * Jump Cut: A Review of Contemporary Media * The text is thorough and does a fine job of clearly defining terms and laying out, and supporting, arguments. The work represents high-quality scholarship that most likely will appeal to advanced students and professionals, though it is definitely accessible to beginners, who will find here a tool that will help them expand their intellectual horizons. * Journal of Folklore Research * A volume from which film students can explore informative, clearly structured, and detailed content, while practitioners and scholars can appreciate its thought-provoking and challenging nature. * Alphaville: Journal of Film and Screen Media *

Brian Winston is the Lincoln Professor at the University of Lincoln, UK. He has held senior academic posts at universities both in the UK and the USA and is a visiting professor at Beijing Normal University. In 1985, he won an Emmy for documentary script-writing and he is the editor of The Documentary Film Book. Gail Vanstone is the coordinator of the Culture & Expression program at York University, Canada. She is concerned with the affordances of new technology for the documentary and women's film production. She is the author of D is for Daring, a history of Studio D the feminist film unit at Canada's National Film Board. Wang Chi is a lecturer at the Communication University of China and a doctoral student at the University of Lincoln, UK. He has published widely on the documentary in Chinese, including the edited volumes (with Brian Winston) Documenting and Methods (2014).