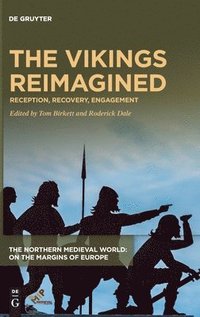 av Tom Birkett, Roderick Dale
Inbunden Engelska, 2020-01-20
958
Köp
Spara som favorit
Skickas inom 3-6 vardagar.
Fri frakt inom Sverige för privatpersoner.
The Vikings Reimagined explores the changing perception of Norse and Viking cultures across different cultural forms, and the complex legacy of the Vikings in the present day. Bringing together experts in literature, history and heritage engagement, this highly interdisciplinary collection aims to reconsider the impact of the discipline of Old Norse Viking Studies outside the academy and to broaden our understanding of the ways in which the material and textual remains of the Viking Age are given new meanings in the present. The diverse collection draws attention to the many roles that the Vikings play across contemporary culture: from the importance of Viking tourism, to the role of Norse sub-cultures in the formation of local and international identities. Together these collected essays challenge the academy to rethink its engagement with popular reiterations of the Vikings and to reassess the position afforded to 'reception' within the discipline.
Visa hela texten

Introduction: Vikings in the Public Eye by Tom Birkett Vikings! by M. J. Driscoll My Vikings and Real Vikings: Drama, Documentary and Historical Consultancy by Neil Price (Re)discovering the Vikings in Poland: From Nineteenth-Century Romantics to Contemporary Warriors by Leszek Gardela Women in Viking Reenactment by Klaudia Karpinska Who's Afraid of an Electric Torch?: Reimagining Gender and the Viking World in Contemporary Picturebooks by Jessica Clare Hancock The Terrible Njorl's Saga: Comedic Reimaginings of the Islendingasoegur from the Victorians to the Present Day by Thomas Spray The One that Got Away in Old Norse Myth, Moby-Dick, and the Work of Hugh MacDiarmid by Heather O'Donoghue Death ere the afternoon: Jomsvikinga saga and a Scene in Hemingway's For Whom the Bell Tolls by Richard North "(No More) Reaving, Roving, Raiding, or Raping": The Ironborn in George R. R. Martin's A Song of Ice and Fire and HBO's Game of Thrones by Carolyne Larrington A Saga King in a Finnish Beijing Opera by Kendra Willson "Pick up Rune": The Use of Runes in Digital Games by Maja Backvall From Barbarian to Brand: The Vikings as a Marketing Tool by Roderick Dale Raiding the Vikings: How does Ireland Consume Its Viking Heritage? by Rebecca Boyd The Great Viking Fake-Off: The Cultural Legacy of Norse Voyages to North America by Eleanor Rosamund Barraclough Afterword: Tell These Stories Yourself by Kevin Crossley-Holland