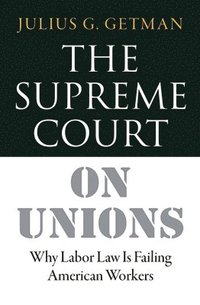 The Supreme Court on Unions

av Julius G Getman
Inbunden Engelska, 2016-06-14
289
Köp
Spara som favorit
Skickas inom 7-10 vardagar.
Fri frakt inom Sverige för privatpersoner.
Finns även som
Visa alla 2 format & utgåvor
Labor unions and courts have rarely been allies. From their earliest efforts to organize, unions have been confronted with hostile judges and antiunion doctrines. In this book, Julius G. Getman argues that while the role of the Supreme Court has become more central in shaping labor law, its opinions betray a profound ignorance of labor relations along with a persisting bias against unions. In The Supreme Court on Unions, Getman critically examines the decisions of the nation's highest court in those areas that are crucial to unions and the workers they represent: organizing, bargaining, strikes, and dispute resolution.As he discusses Supreme Court decisions dealing with unions and labor in a variety of different areas, Getman offers an interesting historical perspective to illuminate the ways in which the Court has been an influence in the failures of the labor movement. During more than sixty years that have seen the Supreme Court take a dominant role, both unions and the institution of collective bargaining have been substantially weakened. While it is difficult to measure the extent of the Court's responsibility for the current weak state of organized labor and many other factors have, of course, contributed, it seems clear to Getman that the Supreme Court has played an important role in transforming the law and defeating policies that support the labor movement.
Visa hela texten

"For more than half a century, Julius G. Getman has brought to the study of labor law not simply the analytical rigor of a law professor, but a hunger for facts-to understand the effects of legal rules on human behavior-and the empathy of a participant-observer-whether among paper workers in Maine, clerical workers at Yale, or university professors across the country.Getman's unique and invaluable perspective is fully on display in this tour through the Supreme Court's labor jurisprudence." -- Craig Becker, General Counsel, AFL-CIO "In this wide-ranging, critical survey of the Supreme Court's labor law decisions, Julius G. Getman displays the practical wisdom and acuity that has made him one of the nation's leading labor law teachers and scholars for more than a half century. Even the most attentive students and scholars of labor law will find valuable insights in this book." -- Cynthia Estlund, New York University School of Law, author of <I>Regoverning the Workplace</I> "Julius G. Getman deftly demonstrates how the Supreme Court-over many decades-has restrained the protections and possibilities contained in the National Labor Relations Act, one of the major achievements of the New Deal era. He paints a detailed and disturbing picture of Court-imposed limitations on workers' ability to exert lawful economic pressure and to vindicate their collective voice. In doing so, Getman brings welcome historical perspective to the current state of U.S. labor law, and situates the Court as an important contributor to the NLRA's weakened status." -- James J. Brudney, Fordham Law School "Julius G. Getman's terrific new book supports in detail his thesis that 'the Supreme Court has played a major role in transforming the National Labor Relations Act from a law meant to empower workers to a law that helps to sustain the power of employers.' He shows that this reactionary Supreme Court role began almost immediately after the passage of the NLRA, that it has continued through Democratic and Republican majorities on the Court, and in particular that the Supreme Court's gutting of the strike weapon has drastically tilted collective bargaining against workers and toward corporations. Getman's keen analysis is informed and strengthened by his unusual combination of academic legal scholarship, research on the reality of labor law in the workplace, and personal involvement." -- John W. Wilhelm, Retired President, UNITE HERE

Julius G. Getman is Earl E. Sheffield Regents Chair in Law Emeritus at the University of Texas at Austin School of Law. He is the author of several books, including The Betrayal of Local 14: Paperworkers, Politics and Permanent Replacements, also from Cornell.