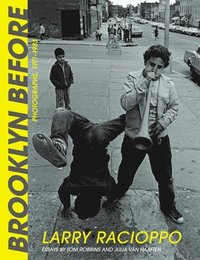 av Tom Robbins, Julia Van Haaften
Inbunden Engelska, 2018-09-15
309
Köp
Spara som favorit
Skickas inom 7-10 vardagar.
Gratis frakt inom Sverige över 159 kr för privatpersoner.
Finns även som
Visa alla 2 format & utgåvor
Before Brooklyn rose to international fame there existed a vibrant borough of neighborhoods rich with connections and traditions. During the 1970s and 1980s, photographer Larry Racioppo, a South Brooklynite with roots three generations deep, recorded Brooklyn on the cusp of being the trendy borough we know today. In Brooklyn Before, Racioppo lets us see the vitality of his native Brooklyn, stretching from historic Park Slope to the beginnings of Windsor Terrace and Sunset Park. His black and white photographs pull us deep into the community, stretching our memories back more than forty years and teasing out the long-lost recollections of life on the streets and in apartment homes. Racioppo has the fascinating ability to tell a story in one photograph and, because of his native bona fides, he depicts an intriguing set of true Brooklyn stories from the inside, in ways that an outsider simply cannot. On the pages of, Brooklyn Before the intimacy and roughness of life in a working-class community of Irish American, Italian American, and Puerto Rican families is shown with honesty and insight. Racioppo's 128 photographs are paired with essays from journalist Tom Robbins and art critic and curator Julia Van Haaften. Taken together, the images and words of Brooklyn Before return us to pre-gentrification Brooklyn and immerse us in a community defined by work, family, and ethnic ties.
Visa hela texten

"A moving portrait of a vanished world." * New York Post * "Racioppo's process will delight any eager photography buff, looking to recapture a world before digital.... Collected together, Racioppo's photographs tell a story of a neighborhood at equilibrium, where laundry hangs undisturbed on a clothesline while kids play baseball in a vacant lot. A good reminder of the durability of New Yorkers in the 1970s." * The Bowery Boys *

Larry Racioppo, born and raised in South Brooklyn, is the author of a previous book of photography, Halloween. He received a 1997 Guggenheim Fellowship in photography and grants from the National Endowment for the Arts, New York State Council on the Arts, and the Graham Foundation. Racioppo's photographs are in numeours collections, including the Museum of the City of New York, Brooklyn Museum, Brooklyn Public Library, El Museo del Barrio, and the National September 11 Memorial & Museum. Tom Robbins reported on New York City for more than thirty years for the Daily News, the New York Observer, and the Village Voice. Cellblock Justice, his series on violence in New York prisons, produced in collaboration with The Marshall Project and the New York Times, was named a 2016 Pulitzer Prize finalist for investigative reporting and won the 2016 Hillman Prize for Newspaper Journalism. He teaches investigative journalism at the CUNY Graduate School of Journalism. Julia Van Haaften is a consultant on photography and museum collections. She has written widely on photography history and curated a score of exhibitions. Her biography of the photographer Berenice Abbott was published in early 2018 by W. W. Norton. Van Haaften was the founding curator of the photography collection at the New York Public Library, from 1980 to 2001, before joining its Digital Library Program. She served as director of collections at the Museum of City of New York from 2005 until her retirement in 2010.