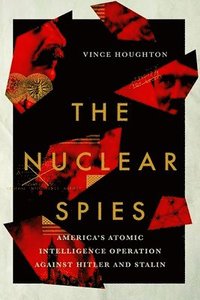 av Vince Houghton
Inbunden Engelska, 2019-09-15
259
Köp
Spara som favorit
Fåtal ex i lager. Skickas inom 1-2 vardagar.
Gratis frakt inom Sverige över 159 kr för privatpersoner.
Finns även som
Visa alla 2 format & utgåvor
Why did the US intelligence services fail so spectacularly to know about the Soviet Union's nuclear capabilities following World War II? As Vince Houghton, historian and curator of the International Spy Museum in Washington, DC, shows us, that disastrous failure came just a few years after the Manhattan Project's intelligence team had penetrated the Third Reich and knew every detail of the Nazi 's plan for an atomic bomb. What changed and what went wrong? Houghton's delightful retelling of this fascinating case of American spy ineffectiveness in the then new field of scientific intelligence provides us with a new look at the early years of the Cold War. During that time, scientific intelligence quickly grew to become a significant portion of the CIA budget as it struggled to contend with the incredible advance in weapons and other scientific discoveries immediately after World War II. As The Nuclear Spies shows, the abilities of the Soviet Union's scientists, its research facilities and laboratories, and its educational system became a key consideration for the CIA in assessing the threat level of its most potent foe. Sadly, for the CIA scientific intelligence was extremely difficult to do well. For when the Soviet Union detonated its first atomic bomb in 1949, no one in the American intelligence services saw it coming.
Visa hela texten

"The exploits of the Alsos mission chronicled in The Nuclear Spies, and the story of the subsequent less successful effort to predict the timeline of the Soviet acquisition of the bomb, should be read by all those interested in intelligence." * International Journal of Intelligence and CounterIntelligence * "Vince Houghton has written an engaging and well-researched book focusing on the U.S. effort to gather scientific intelligence on the German atomic bomb program during World War II. Houghton expands his scope beyond the war to demonstrate that the scientific and atomic intelligence bureacracy designed during the war withered in the immediate post-war era. Therefore, at the start of the Cold War, the United States lagged in the abilities to collect and analyze scientific and atomic intelligence capabilities of the Soviet Union as it raced to an atomic bomb." * The Journal of American History * "In this neat, enthralling study, Houghton wonders why this successful intelligence operation was followed by the failure to anticipate the first Soviet nuclear test in August 1949." * Foreign Affairs * "A great read: Concise, fact-packed, laden with fascinating anecdotes, and chock full of insights... This book is for everyone, intelligence expert and layperson alike. A page turner." * The Cipher Brief *

Vince Houghton is Historian and Curator at the International Spy Museum. He taught courses in Cold War history and intelligence history at the University of Maryland and is the host and creative director of Spycast, the Spy Museum's popular podcast. His work has been published widely in such media as Wall Street Journal, Washington Post, The Economist, Vanity Fair, and many others.

Introduction: The Principal Uncertainty 1. A Reasonable Fear: The U.S. (Mis)Perception of the German Nuclear Program 2. Making Something out of Nothing: The Creation of U.S. Nuclear Intelligence 3. Alsos: The Mission to Solve the Mystery of the German Bomb 4. Transitions: From the German Threat to the Soviet Menace 5. Regression: The Postwar Devolution of U.S. Nuclear Intelligence 6. Whistling in the Dark: The U.S. (Mis)Perception of the Soviet Nuclear Program Conclusion: Credit Where Credit Is Due Notes Selected Bibliography Index