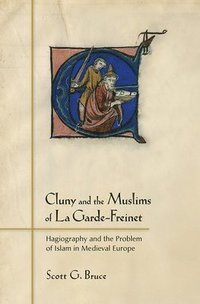 Cluny and the Muslims of La Garde-Freinet

Hagiography and the Problem of Islam in Medieval Europe

av Scott G Bruce
Häftad Engelska, 2020-04-15
199
Köp
Spara som favorit
Skickas inom 10-15 vardagar.
Fri frakt inom Sverige för privatpersoner.
Finns även som
Visa alla 3 format & utgåvor
In the summer of 972 a group of Muslim brigands based in the south of France near La Garde-Freinet abducted the abbot of Cluny as he and his entourage crossed the Alps en route from Rome to Burgundy. Ultimately, the abbot was set free, but the audacity of this abduction outraged Christian leaders and galvanized the will of local lords. Shortly thereafter, Count William of Arles marshaled an army and succeeded in wiping out the Muslim stronghold. The monks of Cluny kept this tale alive over the next century. Scott G. Bruce explores the telling and retelling of this story, focusing on the representation of Islam in each account and how that representation changed over time. The culminating figure in this study is Peter the Venerable, one of Europe's leading intellectuals and abbot of Cluny from 1122 to 1156, who commissioned Latin translations of Muslim texts such as the Qur'an. Cluny and the Muslims of La Garde-Freinet provides us with an unparalleled opportunity to examine Christian perceptions of Islam in the Crusading era.
Visa hela texten

"Crisply written and easy to read, given the density of some of the material. Highly recommended." * Reading Religion * "Overall, this is an impressive book. It diligently unpacks the development of the hagiographical legend surrounding the kidnapping of Maiolus and assesses its impact upon later Cluniac authors-especially Peter the Venerable. It makes positive contributions to several major debates surrounding Peter and the broad character of the Cluniac engagement with non-Christians and places that discussion within a long-term context. Bruce expresses himself with some neat turns of phrase and the book as a whole is a very easy read. It is much to be recommended!" * Islam and Christian-Muslim Relations * "A thoughtful and provocative book... Bruce has demonstrated the importance of the vita of Maiolus on the attitudes of the twelfth-century abbot and raised new ways to think about Peter's approach to Islam." -- Michael Frassetto * JOURNAL OF RELIGION *

Bloggat om Cluny and the Muslims of La Garde-Freinet

Scott G. Bruce is Professor of Medieval History at Fordham University in the Bronx, New York. He is the author of Silence and Sign Language in Medieval Monasticism and editor of Ecologies and Economies in Medieval and Early Modern Europe.

Introduction: Hagiography and Religious Polemic in the Cluniac Tradition 1. News of a Kidnapping The Perils and Promises of Transalpine Travel The Muslims of La Garde-Freinet "The Hordes of Belial Have Surrounded Me" 2. Monks Tell Tales By Savaage Hands Restrained The Preacher's Prowess Fulcher and the Great Wolf Enter Muhammed Interlude: A Cluniac Mission on the Spanish Frontier 3. Peter and the Venerable, Butcher of God Against the Heirs of Inquiry A Christian Arsenal against Islam Assailing the Monstrous Beast Recourse to Reason 4. Hagiography and the Muslim Policy of Peter the Venerable Reasoning with Unbelievers in the Decades around 1100 A Reservoir of Eastern Censure Nalgod's Industry Conclusion