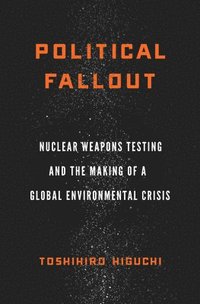 Nuclear Weapons Testing and the Making of a Global Environmental Crisis

av Toshihiro Higuchi
Häftad Engelska, 2020-05-05
269
Köp
Spara som favorit
Skickas inom 5-8 vardagar.
Fri frakt inom Sverige för privatpersoner.
Finns även som
Visa alla 2 format & utgåvor
Political Fallout is the story of one of the first human-driven, truly global environmental crises-radioactive fallout from nuclear weapons testing during the Cold War-and the international response. Beginning in 1945, the United States, Britain, and the Soviet Union detonated hundreds of nuclear weapons in the atmosphere, scattering a massive amount of radioactivity across the globe. The scale of contamination was so vast, and radioactive decay so slow, that the cumulative effect on humans and the environment is still difficult to fully comprehend. The international debate over nuclear fallout turned global radioactive contamination into an environmental issue, eventually leading the nuclear superpowers to sign the landmark Partial Test Ban Treaty (PTBT) in 1963. Bringing together environmental history and Cold War history, Toshihiro Higuchi argues that the PTBT, originally proposed as an arms control measure, transformed into a dual-purpose initiative to check the nuclear arms race and radioactive pollution simultaneously. Higuchi draws on sources in English, Russian, and Japanese, considering both the epistemic differences that emerged in different scientific communities in the 1950s and the way that public consciousness around the risks of radioactive fallout influenced policy in turn. Political Fallout addresses the implications of science and policymaking in the Anthropocene-an era in which humans are confronting environmental changes of their own making.
Visa hela texten

"Political Fallout shows how the superpowers took it upon themselves to determine acceptable risks of nuclear fallout for the entire globe by turning values and opinion into statements of fact. An insightful analysis of how international governance and environmental regulation configured understandings of risk and pollution in the Anthropocene." -- Kate Brown "Higuchi has written a superb study that articulates the role of fallout in ways we have not seen before, showing us how state power shaped our understanding of environmental risks. It is clear that this Cold War story, while forgotten by most, still frames how we imagine the challenges of the so-called Anthropocene." -- Jacob Darwin Hamblin

Toshihiro Higuchi is Assistant Professor of History at Georgetown University.

Contents and AbstractsIntroduction: "To Put an End to the Contamination of Man's Environment" chapter abstractThe 1963 Partial Test Ban Treaty (PTBT) is typically known as a first step toward nuclear-arms control and lesser international tension. Less known is another objective to curb the radioactive contamination of the Earth by atmospheric tests. This book argues that fallout became an unacceptable hazard through the "politics of risk," a worldwide struggle to determine the scientific uncertainty, social acceptability, and policy implications of potential harm from fallout. The Cold War drove this contested knowledge production, as the United States, Britain, the Soviet Union, and key non-nuclear countries mobilized scientists to shape or challenge the acceptability of fallout hazards. Risk politics brought the diverse practices of Cold War science around the world into greater synchronization. By connecting the issues of fallout and a test-ban, it also forged the reciprocal relationship between the Cold War and the Anthropocene, an era of human-induced global environmental change. 1A State of Emergency: The Origins of Radiation Protection in Nuclear Weapons Testing, 1945-1953 chapter abstractThis chapter examines the origins of radiation protection in the testing of nuclear weapons. It explains how the perceived political urgency to develop nuclear weapons led the United States, Britain, and the Soviet Union to define the dangers of radioactive fallout to the general public in a strikingly similar manner as those limited to the risk of acute illness in the test-site region. It also shows that the same logic of national security "emergency" led the Cold War nuclear rivals to start secretly monitoring the global dispersion of fallout as a useful tracer for military intelligence and planning. The compartmentalization of fallout monitoring further obscured potential harm of widespread radioactive contamination from public view. 2"Atomic-Bomb Tuna": The Trans-Pacific Politics of Radiation Protection Standards, 1954-1955 chapter abstractThis chapter focuses on Japan, a key U.S. ally in Asia, as the first country that experienced a major fallout crisis. In 1954, the United States conducted the Castle Bravo thermonuclear bomb test at Bikini Atoll, resulting in radioactive contamination of hundreds of people, including the crew of a Japanese tuna boat. The chapter explains how the U.S. effort to contain the disaster's political fallout backfired. Supported by the U.S. government and the tuna industry, Japanese authorities checked radioactivity in tuna against the most stringent standards to reassure consumers about its safety. This led to the further discovery of contaminated fish and fueled a nationwide panic. The chapter demonstrates how the "atomic-bomb tuna" sparked the rise of anti-nuclear activism in Japan led by concerned housewives. It also examines how U.S. and Japanese officials relied on their scientists to defuse the crisis by introducing the concept of permissible dose. 3Epistemic Stalemate: Genetics and the Creation of Scientific Committees, 1954-1955 chapter abstractThis chapter discusses the role of geneticists in the fallout controversy following the 1954 U.S. Castle Bravo thermonuclear bomb test. It explains how geneticists from the United States and the Soviet Union seized on an uproar over the test to promote understanding of genetic damage caused by radiation. With no institutional base, however, these scientists failed to forge a consensus and bring debates to a closure. The chapter illustrates the key role that the scientists' movement in breaking this stalemate by proposing a UN fallout study for international regulation of nuclear tests. To keep the issue of fallout apart from that of a test ban, the United States and Britain sponsored a UN committee as a purely technical body while commissioning studies from groups of distinguished scholars in their c