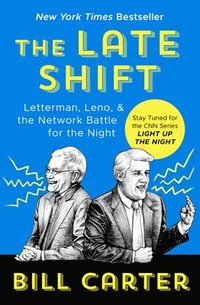 Letterman, Leno, & the Network Battle for the Night

av Bill Carter
(1 röst)
Häftad Engelska, 2019-10-15
205
Köp
Spara som favorit
Kan tyvärr inte levereras innan julafton.
This "gripping" New York Times bestseller from the host of CNN podcast Behind the Desk tells the true story-and backstage drama-of late-night comedy (Los Angeles Times). When beloved host Johnny Carson announced his retirement after thirty years on The Tonight Show, millions of Americans mourned. But inside the television industry, the news ignited a battle between two amazing talents-Jay Leno and David Letterman-who both yearned to occupy the departing legend's chair. For NBC, it would be a decision with millions of dollars at stake. Soon these two comedians with strikingly different styles, who had once shared a friendship as they worked the clubs together, would be engaged in a fierce competition for the prize. Based on in-depth reporting and interviews with those involved, and updated with a new introduction by the author-a producer of CNN series The Story of Late Night-The Late Shift is a "vivid, behind-the-scenes, blow-by-blow account" of the fight that ensued, as stars, agents, and executives maneuvered for control of the most profitable program in TV history (Chicago Tribune). "Remarkably gripping . . . Takes us deep into the bizarre high-stakes world of broadcasting . . . A powerful story, and ultimately a sad one, filled with casualties as well as winners." -The New York Times Book Review "Solid reporting, based on extensive interviews with the principals, lifts The Late Shift into a class of its own. . . . The insights into the people involved are what make [the book] a page-turner." -Orange Country Register
Visa hela texten

"Fascinating . . . a tale of passion, ambition, infighting, and runaway ego worthy of Shakespeare." -Los Angeles Daily News "Unearths juicy nuggets, each related with the sure, suspense-evoking hand of a thriller novelist." -Entertainment Weekly "A definitive account . . . Anyone who wants to know how the TV industry works at its highest level will find a wealth of information." -The Philadelphia Inquirer "Remarkably well-reported." -New York magazine "Fascinating depth and detail." -Chicago Tribune

Bill Carter joined the New York Times as a national media reporter in 1989. He is the author of New York Times bestseller The Late Shift and two other books on the television industry-Monday Night Mayhem and Desperate Networks-and has written numerous articles for the New York Times Magazine and other publications. Carter has been a guest on Nightline, Today, CNN, Charlie Rose, NBC Nightly News with Brian Williams, and many other shows. A graduate of the University of Notre Dame, he lives in New Jersey with his wife. They have two children.