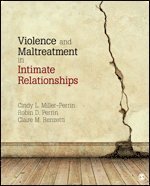 Violence and Maltreatment in Intimate Relationships

av Cindy L Miller-Perrin
Häftad Engelska, 2017-07-20
679
Köp
Spara som favorit
Skickas inom 7-10 vardagar.
Fri frakt inom Sverige för privatpersoner.
Finns även som
Visa alla 1 format & utgåvor
Violence and Maltreatment in Intimate Relationships provides current and complete coverage of physical, sexual, and psychological abuse that occurs within intimate relationships. Authors Cindy L. Miller-Perrin and Robin D. Perrin, co-authors of SAGE?s best-selling Family Violence Across the Life, Third Edition, have created a streamlined organizational framework in Violence and Maltreatment in Intimate Relationships which presents information to students in an accessible manner. In this new book, Miller-Perrin and Perrin have teamed up with renowned researcher Claire M. Renzetti, who draws on her extensive work on violence against women. The book offers both a sociological and psychological focus, examining traditional areas of interpersonal violence as well as forms of intimate abuse outside the family, and concludes with a call for appropriate social, legal, policy, and personal responses to address the problem of abuse in intimate relationships.

Robin D. Perrin is currently Professor of Sociology at Pepperdine University in Malibu, California. His research interests and publications are in the areas of interpersonal violence, deviance theory, the social construction of social problems, and the sociology of religion. He is the coauthor of three books: Social Deviance: Being, Behaving, and Branding (with D. Ward & T. Carter, 1991), Child Maltreatment: An Introduction (with C. Miller-Perrin, Sage, 1999; 2007), and Family Violence Across the Lifespan (with O. Barnett & C. Miller-Perrin, Sage, 1997, 2005; 2011). He is the author or coauthor of numerous articles on a variety of topics related to religion, deviance, and interpersonal violence. He is the recipient of the 2004 Howard A. White Award for Teaching Excellence. He received his doctorate in sociology from Washington State University in 1989. Following his doctoral studies he was Assistant Professor of Sociology at Seattle Pacific University in Seattle, Washington.

Claire M. Renzetti, PhD, is the Judi Conway Patton Endowed Chair in the Center for Research on Violence Against Women, and Professor and Chair of the Sociology Department at the University of Kentucky. She is editor of the international, interdisciplinary journal, Violence Against Women; co-editor with Jeffrey Edleson of the Interpersonal Violence book series for Oxford University Press; and editor of the Gender and Justice book series for University of California Press. She has authored or edited 25 books as well as numerous book chapters and articles in professional journals. Much of her research has focused on the violent victimization experiences of socially and economically marginalized women. Her current research includes studies examining the relationship between religiosity and intimate partner violence perpetration, an evaluation of a horticultural therapy program at a shelter for battered women, and a study of potential jurors prototypes of sex trafficking victims and perpetrators. She has held elected and appointed leadership positions in national and regional professional organizations, and has been honored with awards for her work to improve the quality of life and the health and safety of women.