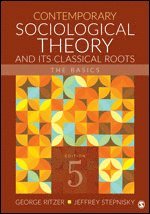 av George Ritzer
Häftad Engelska, 2018-02-28
639
Köp
Spara som favorit
Skickas inom 7-10 vardagar.
Fri frakt inom Sverige för privatpersoner.
Contemporary Sociological Theory and Its Classical Roots: The Basics is a brief survey of sociology's major theorists and theoretical approaches, from the Classical founders to the present. With updated scholarship in the new Fifth Edition, authors George Ritzer and Jeffrey Stepnisky connect many theorists and schools of thought together under broad headings that offer students a synthesized view of sociological theory. This text is perfect for those who want an accessible overview of the entire tradition of sociological thinking, with an emphasis on the contemporary relevance of theory.
Visa hela texten

George Ritzer is Distinguished University Professor at the University of Maryland, where he has also been a Distinguished Scholar-Teacher and won a Teaching Excellence Award. He was awarded the Distinguished Contributions to Teaching Award by the American Sociological Association, an honorary doctorate from LaTrobe University in Australia, and the Robin Williams Lectureship from the Eastern Sociological Society. His best-known work, The McDonaldization of Society (8th ed.), has been read by hundreds of thousands of students over two decades and translated into over a dozen languages. Ritzer is also the editor of McDonaldization: The Reader; and author of other works of critical sociology related to the McDonaldization thesis, including Enchanting a Disenchanted World, The Globalization of Nothing, Expressing America: A Critique of the Global Credit Card Society, as well as a series best-selling social theory textbooks and Globalization: A Basic Text. He is the Editor of the Encyclopedia of Social Theory (2 vols.), the Encyclopedia of Sociology (11 vols.; 2nd edition forthcoming), the Encyclopedia of Globalization (5 vols.), and is Founding Editor of the Journal of Consumer Culture. In 2016 he will publish the second edition of Essentials of Sociology with SAGE.