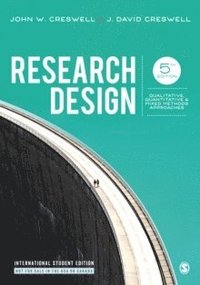 av John W Creswell
(1 röst)
Häftad Engelska, 2018-01-05
Studentlitteratur
640
Köp
Spara som favorit
Finns även som
Visa alla 1 format & utgåvor
This best-selling text pioneered the comparison of qualitative, quantitative, and mixed methods research design. For all three approaches, John W. Creswell and new co-author J. David Creswell include a preliminary consideration of philosophical assumptions, key elements of the research process, a review of the literature, an assessment of the use of theory in research applications, and reflections about the importance of writing and ethics in scholarly inquiry.

New to this Edition:

An invaluable guide for students and researchers across the social and behavioural sciences.
Visa hela texten

John W. Creswell, PhD, is a professor of family medicine and senior research scientist at the Michigan Mixed Methods Program at the University of Michigan. He has authored numerous articles and 30 books on mixed methods research, qualitative research, and research design. While at the University of Nebraska-Lincoln, he held the Clifton Endowed Professor Chair, served as Director of the Mixed Methods Research Office, founded SAGEs Journal of Mixed Methods Research, and was an adjunct professor of family medicine at the University of Michigan and a consultant to the Veterans Administration health services research center in Ann Arbor, Michigan. He was a Senior Fulbright Scholar to South Africa in 2008 and to Thailand in 2012. In 2011, he co-led a National Institute of Health working group on the best practices of mixed methods research in the health sciences, and in 2014 served as a visiting professor at Harvards School of Public Health. In 2014, he was the founding President of the Mixed Methods International Research Association. In 2015, he joined the staff of Family Medicine at the University of Michigan to Co-Direct the Michigan Mixed Methods Program. In 2016, he received an honorary doctorate from the University of Pretoria, South Africa. In 2017, he co-authored the American Psychological Association standards on qualitative and mixed methods research. In 2018 his book on Qualitative Inquiry and Research Design (with Cheryl Poth) won the Textbook and Academic Authors 2018 McGuffey Longevity Award in the United States. He currently makes his home in Ashiya, Japan and Honolulu, Hawaii.