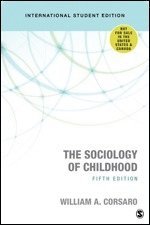 The Sociology of Childhood

av William A Corsaro
(1 röst)
Häftad Engelska, 2017-08-10
Studentlitteratur
475
Köp
Spara som favorit
William A. Corsaro's groundbreaking work, The Sociology of Childhood, Fifth Edition discusses children and childhood from a sociological perspective - providing in-depth coverage of social theories of childhood, the peer cultures and social issues of children and youth, and children and childhood within the frameworks of culture and history.
Visa hela texten

William A. Corsaro was Robert H. Shaffer Class of 1967 Endowed Chair and is now Professor Emeritus in the Department of Sociology at Indiana University, Bloomington where he won the Presidents Award for Distinguished Teaching in 1988. He was the first recipient of the Distinguished Career Award for the Section on Children and Youth of the American Sociological Association in 2013. He taught courses on the sociology of childhood, childhood in contemporary society, and ethnographic research methods. His primary research interests are the sociology of childhood, childrens peer cultures, the sociology of education, and ethnographic research methods. Corsaro is the author of Friendship and Peer Culture in the Early Years (1985), author of Were Friends, Right: Inside Kids Culture (2003), and coauthor with Luisa Molinari of I Compagni: Understanding Childrens Transition from Preschool to Elementary School (2005).  He is the coeditor with Jens Qvortrup and Michael-Sebastian Honig of The Palgrave Handbook of Childhood Studies (2009). Corsaro was a Fulbright Senior Research Fellow in Bologna, Italy, in 1983-1984 and a Fulbright Senior Specialist Fellow in Trondheim, Norway, in 2003. He received an honorary doctorate from Uppsala University, Sweden in 2016.