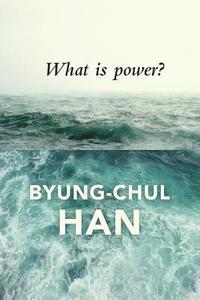 av Byung-Chul Han
Inbunden Engelska, 2018-10-05
449
Köp
Spara som favorit
Finns även som
Visa alla 3 format & utgåvor
Power is a pervasive phenomenon yet there is little consensus on what it is and how it should be understood. In this book the cultural theorist Byung-Chul Han develops a fresh and original perspective on the nature of power, shedding new light on this key feature of social and political life. Power is commonly defined as a causal relation: an individual's power is the cause that produces a change of behaviour in someone else against the latter's will. Han rejects this view, arguing that power is better understood as a mediation between ego and alter which creates a complex array of reciprocal interdependencies. Power can also be exercised not only against the other but also within and through the other, and this involves a much higher degree of mediation. This perspective enables us to see that power and freedom are not opposed to one another but are manifestations of the same power, differing only in the degree of mediation. This highly original account of power will be of great interest to students and scholars of philosophy and of social, political and cultural theory, as well as to anyone seeking to understand the many ways in which power shapes our lives today.
Visa hela texten

'On an itinerary driven by unusual intellectual independence and perfect argumentative transparency, Byung-Chul Han may have reached the level of true philosophical mastership. Based on a circumspect discussion of the positions marked by some classical thinkers of modernity, What is Power? develops a new vision of the asymmetries produced by human interaction and thus lives up to the promise to "deprive power of that power it has on account of the fact that we do not fully understand what it actually is."' Hans Ulrich Gumbrecht, Stanford University "The new star of German philosophy." El Pais "It's no exaggeration to say that Han is one of the most relevant philosophers of our age, able to make diagnoses when other philosophers, particularly knee-jerk Foucauldian social critics in America, have trouble even seeing an illness. What is Power? is an important document of a philosopher still developing, still growing, though it's nevertheless interesting in its own right. Han's flops are better than most other philosophers' greatest hits." The American Conservative

Byung-Chul Han is a Korean-born Professor of Philosophy and Cultural Studies who teaches at the University of the Arts (UdK) in Berlin. He is the author of more than 20 books including The Transparency Society and The Burnout Society.