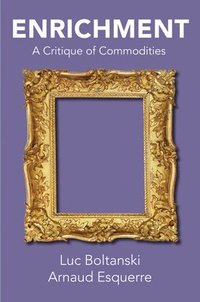 A Critique of Commodities

av Luc Boltanski, Arnaud Esquerre
Inbunden Engelska, 2020-04-09
459
Köp
Spara som favorit
Skickas inom 7-10 vardagar.
Fri frakt inom Sverige för privatpersoner.
Finns även som
Visa alla 1 format & utgåvor
This book offers a major new account of modern capitalism and of the ways in which value and wealth are created today. Boltanski and Esquerre argue that capitalism in the West has recently undergone a fundamental transformation characterized by de-industrialization, on the one hand, and, on the other, by the increased exploitation of certain resources that, while not entirely new, have taken on unprecedented importance. It is this new form of exploitation that has given rise to what they call the 'enrichment economy'. The enrichment economy is based less on the production of new objects and more on the enrichment of things and places that already exist. It has grown out of a combination of many different activities and phenomena, all of which involve, in their varying ways, the exploitation of the past. The enrichment economy draws upon the trade in things that are intended above all for the wealthy, thus providing a supplementary source of enrichment for the wealthy people who deal in these things and exacerbating income inequality. As opportunities to profit from the exploitation of industrial labour began to diminish, capitalism shifted its focus to expand the range of things that could be exploited. This gave rise to a plurality of different forms for making things valuable - valuing objects in terms of their properties is only one such form. The form that plays a central role in the enrichment economy is what the authors call the 'collection form', which values objects based on the gap they fill in a collection. This valuation process relies on the creation of narratives which enrich commodities. This wide-ranging and highly original work makes a major contribution to our understanding of contemporary societies and of how capitalism is changing today. It will be of great value to students and scholars in sociology, political economy and cultural studies, as well as to anyone interested in the social and economic transformations shaping our world.
Visa hela texten

Boltanski and Esquerre propose a grammar of things and their value that sheds new light on the transformations of contemporary capitalism. An original and powerful work which will undoubtedly stimulate much debate. Cl?ment Lefranc, Sciences humaines A seminal book. European Journal of Sociology

Luc Boltanski is Professor of Sociology at the EHESS, Paris and he is the author of many books, including The New Spirit of Capitalism (with Eve Chiapello). Arnaud Esquerre is a researcher at Centre National de la Recherche Scientifique (CNRS) and Director of the Institute for Interdisciplinary Research on Social Issues (Paris).

Acknowledgments Translator's note Preface by Charles Sabel Introduction PART I. Destruction and Creation of Wealth Chapter 1. The Age of the Enrichment Economy The deindustrialization of Western Europe Old and new sites of prosperity The omnipresence of enriched objects The rise of luxury Heritage creation The development of tourism The expansion of cultural activities The art trade Arles: from railroad shops to contemporary art exhibits An economic reorientation toward the wealthy Chapter 2. Toward Enrichment The characteristics of an enrichment economy Dormant resources in the enrichment economy Changes in French cultural policy A new perspective in economic analysis A shift to different scales From ornamental patrimony to heritage creation Local mutations in global capitalism Partisans of things Part II. Prices and Forms of Valuation Chapter 3. Commerce in Things The commodity condition On the circulation of things Changing hands The process of determination Price and metaprice Critiquing the price Value as justification for a price Price as an element in the construction of reality Chapter 4. Forms of Valuation Structure and transformation group of forms of valuation Analytic and narrative presentations of things The problem of valuation by means of images On the reproduction of things Institutions and forms of valuation Structuralism and capitalism Competition from a systematic viewpoint Capitalism and markets The role of the capacity to reflect The structure of the forms of valuation Part III. Commodity Structures Chapter 5. The Standard Form The model for the standard form The standard form and industrial production Prototypes and specimens The proliferation of things without persons The internal tensions of the standard form The unease created by the standard form Chapter 6. Standardization and Differentiation The historical dimension of the forms of valuation From trade in things to the circulation of commodities The effect of standardization on the constitution of forms of valuation Material economies, immaterial economies Chapter 7. The Collection Form The modernity of the collection form Systematic collection as an arrangement for valuation Collectors' items Price and value of collectors' items The fields of collectibles The structure of the collection form Chapter 8. Collection and Enrichment The usefulness of useless things Collecting in thrall to marketing On the use of the collection form by luxury firms From lumber to luxury goods: the transformation of the Pinault group into Kering Capturing the wealth of the wealthiest Values and prices of luxury product brands Standard products with a "collector effect" and collectors' items The collection form and contemporary art The contradiction of the enrichment economy Chapter 9. The Trend Form Trend, sign, and distinction The structure of the trend form The economic constraints of the trend form From the trend form to the collection form Chapter 10. The Asset Form Characteristics of the asset form On the liquidity of things as assets The commercial potential of assets Part IV. Who Profits from the Past Chapter 11. Profit in a Commercial Society Competition and differentiation Surplus work value and profit Surplus market value and profit Displacing commodities or displacing buyers Profiting from the wealthy in the capitalist cosmos Chapter 12. The Enrichment Economy in Practice An enriched village: Laguiole in Aubrac The transformation of habitats through heritage creation New "traditional festivals" in the village Heritage creation around food A landscape to contemplate Cutlery valorized by the collection form The "artisanal" manufacture of a knife in Laguiole A collectible knife Museification as a means of commercialization Th