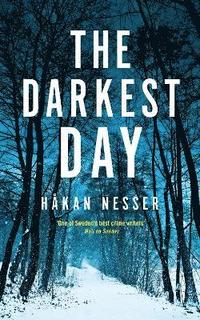 av Hakan Nesser
Inbunden Engelska, 2017-10-31
179
Köp
Spara som favorit
Skickas inom 7-10 vardagar.
Fri frakt inom Sverige för privatpersoner.
Finns även som
Visa alla 2 format & utgåvor
The Darkest Day is the first novel in the five part Inspector Barbarotti series from renowned Swedish crime author Hakan Nesser. It's December in the quiet Swedish town of Kymlinge, and the Hermansson family are gathering to celebrate father Karl-Erik and eldest daughter Ebba's joint landmark birthdays. But beneath the guise of happy festivities, tensions are running high, and it's not long before the night takes a dark and unexpected turn . . . Before the weekend is over, two members of the Hermansson family are missing, and it's up to Inspector Barbarotti - a detective who spends as much of his time debating the existence of God as he does solving cases - to determine exactly what has happened. And he soon discovers he'll have to unravel a whole tangle of sinister family secrets in the process . . .
Visa hela texten

A top-notch investigation into some grisly goings-on, courtesy of his latest crime-fighting duo Barbarotti and Backman * Riveting Reads * In an exemplary translation by Sarah Death, this tangled tale of guilt and betrayal whets the appetite for translations of the other Barbarotti novels -- Barry Forshaw * Financial Times * Told with wry humour and compassion, Nesser has four more Barbarotti stories to come - cherish them all -- Geoffrey Wansell * Daily Mail * Barbarotti has to disentangle years of bad blood and resentment to get to the heart of a thrillingly complex case -- Joan Smith * Sunday Times *

Hakan Nesser is one of Sweden's most popular crime writers, receiving numerous awards for his novels featuring Inspector Van Veeteren, including the European Crime Fiction Star Award (Ripper Award), the Swedish Crime Writers' Academy Prize (three times) and Scandinavia's Glass Key Award. His Van Veeteren series is published in over twenty-five countries and has sold over 15 million copies worldwide. Hakan Nesser lives in Gotland with his wife, and spends part of each year in the UK.