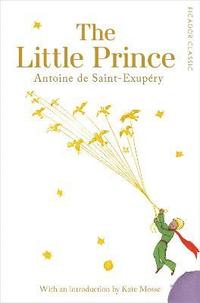 av Antoine De Saint-Exupery
Häftad Engelska, 2015-10-08
99
Köp
Spara som favorit
Skickas inom 10-15 vardagar.
Fri frakt inom Sverige över 159 kr för privatpersoner.
With an introduction by Kate Mosse Translated by Ros Schwartz All grown-ups were children once (but most of them have forgotten). A pilot who has crash landed in the desert awakes to see an extraordinary little boy. 'Please,' asks the stranger, 'will you draw me a little lamb!' Baffled by the little prince's incessant questioning, the pilot pulls out his pencil, and starts to draw. As the little prince's curiosity takes them further on their journey together, the pilot is able to piece together an understanding of the tiny planet from which the prince has come and of his incredible travels across the universe. First published in 1943, The Little Prince by Antoine de Saint-Exupery has been translated into more than 250 languages, becoming a global phenomenon. Heart-breaking, funny and thought-provoking, it is an enchanting and endlessly wise fable about the human condition and the power of imagination. A book about both childhood and adulthood, it can be read as a parable, a war story, a classic children's fairy-tale, and many more things besides: The Little Prince is a book for everyone; after all, all grown-ups were children once. 'The Little Prince moves from asteroid to desert, from fable and comedy to enigmatic tragedy, in order to make one recurrent point: You can't love roses. You can only love a rose' Adam Gopnik, New Yorker
Visa hela texten

Ros Schwartz's translation is beautifully judged * Financial Times * The Little Prince moves from asteroid to desert, from fable and comedy to enigmatic tragedy, in order to make one recurrent point: You can't love roses. You can only love a rose -- Adam Gopnik * New Yorker *

Antoine de Saint-Exupery, born in Lyon in 1900, was a French writer and aviator. He is best remembered for The Little Prince, and for his books about aviation adventures. In 1921 he began his military service and trained as a pilot, going on to become one of the pioneers of international postal flight. At the outbreak of the Second World War he joined the French Air Force flying reconnaissance missions until the armistice with Germany. Following a spell writing in the United States, he joined the Free French Forces. Then on 31 July 1944, he went on a mission to collect information on German troop movements in the Rhone valley and was never seen again. It was assumed that he was shot down over the Mediterranean. An unidentifiable body wearing French colours was found several days later and buried in Carqueiranne that September.