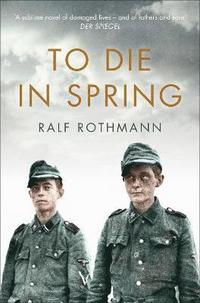 To Die in Spring

av Ralf Rothmann
Häftad Engelska, 2018-05-03
99
Köp
Spara som favorit
Skickas inom 10-15 vardagar.
Fri frakt inom Sverige över 159 kr för privatpersoner.
Finns även som
Visa alla 1 format & utgåvor
Winner of the HWA Sharpe Gold Crown for Best Historical Novel 2018 '[To Die in Spring] holds its own against [Gunter] Grass and [Erich Maria] Remarque; it is an excellent work, and one deserving of its wide readership.' Guardian Walter Urban and Friedrich 'Fiete' Caroli work side by side as hands on a dairy farm in northern Germany. By 1945, it seems the War's worst atrocities are over. When they are forced to 'volunteer' for the SS, they find themselves embroiled in a conflict which is drawing to a desperate, bloody close. Walter is put to work as a driver for a supply unit of the Waffen-SS, while Fiete is sent to the front. When the senseless bloodshed leads Fiete to desert, only to be captured and sentenced to death, the friends are reunited under catastrophic circumstances. In a few days the war will be over, millions of innocents will be dead, and the survivors must find a way to live with its legacy. An international bestseller, To Die in Spring is a beautiful and devastating novel by German author Ralf Rothmann.
Visa hela texten

Brilliant . . . Spare and elegant, [To Die in Spring] paints a quietly harrowing picture of the lasting effects of human violence . . . Directly confronting issues of responsibility, accountability, and legacy, this is an undeniably powerful work. * Publishers' Weekly (starred review) * In To Die in Spring Ralf Rothmann finds a way to describe German suffering without succumbing to self-pity or overlooking guilt. An extraordinary novel. * La Nueva Espana * The war is almost over, the Russians are getting nearer and two young men join the SS. A bad career move, but To Die in Spring is a wonderful, precise, very moving novel by German author Ralf Rothmann. -- Roddy Doyle * Guardian * To Die in Spring by Ralf Rothmann, is the best novel about the end of the Second World War in years, and a beautiful anti-war tale of universal importance . . . With its lyrical realism, the text reaches new heights. Not a word is out of place. * El Pais * Rothmann tells a story which, without resorting to a hyper-realistic description of catastrophe, narrates the destruction of human beings who seek to remain untouched by evil, who strive with very different intensities to preserve the traces of their humanity . . . Moving, with exquisite prose, suffused with a sense of poetry, in the face of human and collective desolation. * Diario Vasco * One can justifiably say that To Die in Spring heralds the post-Grass era with force. * Die ZEIT * He imagines the characters, landscapes, dialogues with hallucinatory precision, doesn't spare the reader any detail of the brutality . . . [He] lets objects - a footstool, a coat, the hem of a dress - speak. * Suddeutsche Zeitung * As a critic, one should use superlatives cautiously, but this novel is a sensation, a literary and political event. Rothmann's scenes and imagery are so impressive that readers experience the sensation of standing on the battlefield themselves. The author always finds the appropriate words for the horror, for this life damaged by war . . . Rothmann poses the question of guilt, without moralising . . . Apart from the prizes that this powerful and smart novel will receive, one wishes the text one thing first and foremost: many readers. From all generations, in Germany and abroad, because in belligerent times like these, the sad story of Walter and Friedrich is a strong, timeless beacon against war. * SWR * With his powerful poetics, Ralf Rothmann belongs to the most important German authors, and as a narrator, he is possibly the most sensitive of his generation. He visualises thoughts, gestures and noises masterfully. * Frankfurter Allgemeine Zeitung * A sublime novel of damaged lives - and of fathers and sons. * Der Spiegel * Searing, haunting, incandescent: Rothmann's new novel is a vital addition to the trove of wartime fiction. * Kirkus (starred review) * In contemporary German literature, there is nothing that can be compared to this book. * Frankfurter Allgemeine Zeitung * In this masterpiece, Ralf Rothmann manages the seemingly impossible. He describes the guilt of their fathers' generation from the viewpoint of the post-War generation without betraying it to a moralising know-it-all attitude. * Badische Zeitung * Rothmann's work [is] one of the most substantial of contemporary German literature. * Tagesspiegel * Yes, you've already read Remarque, but you should read this one because it's not just the story of wartime trauma, but also the story of how that trauma affects the future. Walter Urban and his friend Friedrich Caroli are just 17 years old when they're drafted from their dairy-farm duties into the trenches. Today, right now, we all need to read the chilling section in which very young men are hectored into military service. * LitHub * A remarkable and memorable book, about the nastiness, fear, dirt and brutality of war . . . Few novels, in any language, have conveyed them better. -- Caroline Moorehead * Times Literary Supplement * A wonderful, precise, very moving novel. --

Bloggat om To Die in Spring

Ralf Rothmann is a German novelist, poet, and dramatist. To Die in Spring is his eighth novel, but the first to be published in the UK.