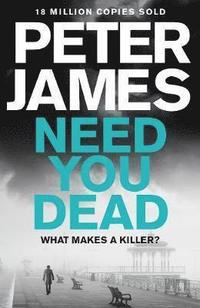 Roy Grace, creation of the CWA Diamond Dagger award winning author Peter James, faces his most mysterious case yet in Need You Dead. Lorna Belling, desperate to escape the marriage from hell, falls for the charms of another man who promises her the earth. But, as Lorna finds, life seldom follows the plans you've made. A chance photograph on a client's mobile phone changes everything for her. When the body of a woman is found in a bath in Brighton, Detective Superintendent Roy Grace is called to the scene. At first it looks an open and shut case with a clear prime suspect. Then other scenarios begin to present themselves, each of them tantalizingly plausible, until, in a sudden turn of events, and to his utter disbelief, the case turns more sinister than Grace could ever have imagined.
Visa hela texten

Peter James has penetrated the inner workings of police procedures, and the inner thoughts and attitudes of real detectives, as no English crime writer before him. His hero, Roy Grace, may not be the most lively cop, nor the most damaged by drink, weight or misery, but he's one of the most believable * The Times * Peter James is one of the best crime writers in the business -- Karin Slaughter James just gets better and better and deserves the success he has achieved with this first-class series * Independent on Sunday * Meticulous research gives his prose great authenticity . . . James manages to add enough surprises and drama that by the end you're rooting for the police and really don't know if they will finally get their men * Sunday Express * No one can deny James's success as a crime novelist . . . The Grace stories almost always go to the top of the bestseller lists, not least because they are supremely well-told. James writes meticulously researched police procedurals, so informed that you can smell the canteen coffee . . . enthralling * Daily Mail * In my thirty four years of policing, never have I come across a writer who so accurately depicts "The Job" -- Detective Investigator Pat Lanigan, Office of the District Attorney, NYPD

Peter James is the international bestselling author of many award-winning novels. His Detective Superintendent Roy Grace series, set in Brighton, has been translated into thirty-seven languages with worldwide sales of over eighteen million copies, and has given him eleven consecutive Sunday Times number ones. In 2015 WHSmith customers publicly voted him the Greatest Crime Author of All Time and in 2016 he became the recipient of the coveted CWA Diamond Dagger lifetime achievement award for sustained excellence. Peter has also written a short story collection, A Twist of the Knife, and his standalone titles include Perfect People and The House on Cold Hill. The Perfect Murder, Dead Simple and Not Dead Enough have all been turned into smash-hit stage plays. All his novels reflect his deep interest in the world of the police. Three of his novels have been filmed and before becoming a full-time author he produced numerous films, including The Merchant of Venice, starring Al Pacino and Jeremy Irons. He divides his time between his homes in Notting Hill, London and near Brighton in Sussex.