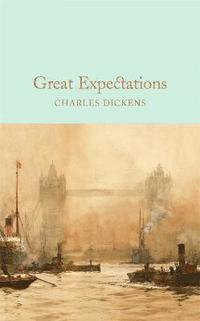 Prova fritt i 14 dagar »
Finns även som
Visa alla 8 format & utgåvor
One of Charles Dickens's most renowned and enjoyable novels, Great Expectations tells the story of Pip, an orphan boy who wishes to transcend his humble origins and finds himself unexpectedly given the opportunity to live a life of wealth and respectability. Over the course of the tale, in which Pip encounters such famous characters as Miss Havisham, Herbert Pocket and Joe Gargery, he comes to realise that his money is tainted and the girl he loves will not return his affections; happiness must be found in the things he gave up in pursuit of a more sophisticated life. Illustrated by various artists, with an afterword by David Pinching. Designed to appeal to the booklover, the Macmillan Collector's Library is a series of beautiful gift editions of much loved classic titles. Macmillan Collector's Library are books to love and treasure.
Visa hela texten

Charles Dickens was born in 1812 near Portsmouth, where his father worked as a clerk. Living in London in 1824, Dickens was sent by his family to work in a blacking-warehouse, and his father was arrested and imprisoned for debt. Fortunes improved and Dickens returned to school, eventually becoming a parliamentary reporter. His first piece of fiction was published by a magazine in December 1832, and by 1836 he had begun his first novel, The Pickwick Papers. He focused his career on writing, completing fourteen highly successful novels including Great Expectations, Oliver Twist and Bleak House, as well as penning journalism, shorter fiction and travel books. He died in 1870.