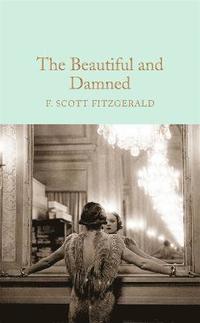 The Beautiful and Damned

av F Scott Fitzgerald
Inbunden Engelska, 2016-09-08
109
Köp
Spara som favorit
Skickas inom 10-15 vardagar.
Fri frakt inom Sverige över 159 kr för privatpersoner.
Finns även som
Visa alla 8 format & utgåvor
The Beautiful and Damned, F. Scott Fitzgerald's second novel, tells the story of Anthony Patch, a 1920s socialite and presumptive heir to a tycoon's fortune. Anthony and his wife Gloria are young and gorgeous, rich and leisured, and dedicate their lives to the reckless pursuit of happiness. But this intimate story turns tragic, as their marriage disintegrates under the weight of their expectations, dissipation, jealousy and aimlessness. Fitzgerald skilfully portrays the east-coast elite as the Jazz Age begins its ascent, engulfing all classes into what will soon be known as Cafe Society. As with all of Fitzgerald's novels, it is a brilliant character study written in breathtaking prose. It is also a gripping account of the complexities of marriage, largely based on Fitzgerald's relationship with his wife, Zelda. This Macmillan Collector's Library edition features an afterword by Ned Halley. Designed to appeal to the booklover, the Macmillan Collector's Library is a series of beautiful gift editions of much loved classic titles. Macmillan Collector's Library are books to love and treasure.
Visa hela texten

Anthony Patch The victors belong to the spoils.

Bloggat om The Beautiful and Damned

F. Scott Fitzgerald (1896-1940) was born into a well-to-do Catholic family living in St Paul, Minnesota. At Princeton University he decided to become a writer, leaving without graduating in 1917 to join the army when America entered the First World War. Believing he would be killed at the front, he hurriedly wrote his first novel, but was not sent to Europe. His first novel, This Side of Paradise (1920) was published to great critical acclaim. He married Zelda Sayle a week after the publication and they embarked on an extravagant lifestyle in New York, which provided much material for The Beautiful and Damned (1922). By this time their daughter, Scottie, had been born, Scott and Zelda had moved to Long Island, which was to be the setting of Fitzgerald's next novel, The Great Gatsby (1925). His fourth novel Tender is the Night, was published in 1934.