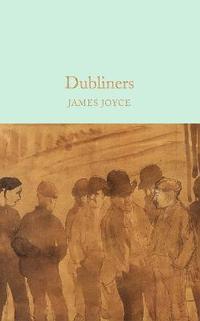 av James Joyce
Inbunden Engelska, 2016-10-06
121
Köp
Spara som favorit
Kan levereras innan julafton!
Finns även som
Visa alla 8 format & utgåvor
First published in 1914, Dubliners depicts middle-class Catholic life in Dublin at the start of the twentieth century. Themes within the stories include the disappointments of childhood, the frustrations of adolescence, and the importance of sexual awakening. James Joyce was twenty-five years old when he wrote this collection of short stories, among which 'The Dead' is probably the most famous. Considered at the time as a literary experiment, Dubliners contains moments of joy, fear, grief, love and loss, which combine to form one of the most complete depictions of a city ever written, and the stories remain as refreshingly original and surprising in this century as they did in the last. This Macmillan Collector's Library edition of Dubliners features an afterword by dramatist Peter Harness. Designed to appeal to the booklover, the Macmillan Collector's Library is a series of beautiful gift editions of much loved classic titles. Macmillan Collector's Library are books to love and treasure.
Visa hela texten

James Joyce was born in 1882. He came from a reasonably wealthy Dublin family which, predominantly because of Joyce's father John, was soon plunged into financial hardship. The young Joyce attended Clongowes College, Belvedere College and, eventually, University College, Dublin. In 1904 he met Nora Barnacle, and eloped with her to Croatia. From this point on, Joyce lived as an exile, moving from Trieste to Rome, and then to Zurich and Paris. His major works are Dubliners (1914), A Portrait of the Artist as a Young Man (1916), Ulysses (1922) and Finnegans Wake (1939). He died in 1941, by which time he had come to be regarded as one of the world's greatest novelists.