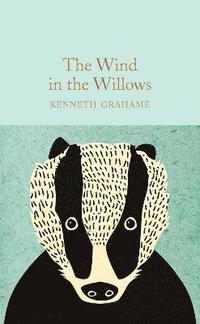 av Kenneth Grahame
Inbunden Engelska, 2017-03-23
120
Bevaka
Spara som favorit
Tillfälligt slut – klicka "Bevaka" för att få ett mejl så fort boken går att köpa igen.
Finns även som
Visa alla 8 format & utgåvor
One of the most celebrated works of classic literature for children, The Wind in the Willows by Kenneth Grahame remains a timeless tale of camaraderie, loyalty and bravery more than a hundred years after its first publication. Mole and Rat have a pleasant life by the river, where they talk, boat and wile away the days. The wise and private Mr Badger lives sedately in the Wild Woods, content in his solitude. Then there's Mr Toad - wealthy, impulsive and utterly obsessed with motor cars, he's always getting into scrapes and can't survive without the help of his friends. With sixteen gorgeous colour illustrations by the celebrated Arthur Rackham, and an afterword by author David Stuart Davies.
Visa hela texten

Kenneth Grahame was born in Edinburgh in 1859. He was educated at St Edward's school, Oxford, but because of family circumstances he was unable to enter Oxford University. He joined the Bank of England as a gentleman clerk in 1879, rising to become its Secretary in 1898. In 1899 he married Elspeth Thomson and their only child, Alistair, was born a year later. He left the Bank in 1908 on health grounds. That same year, The Wind in the Willows was published. The book was not an immediate success, and he never attempted to write fiction again. However, the popularity of the novel grew steadily and, by the time of Grahame's death in 1932 it was recognised as a children's classic.