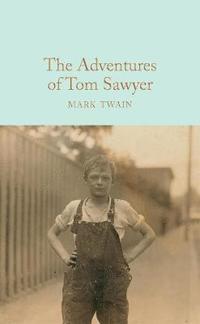 The Adventures of Tom Sawyer

av Mark Twain
Inbunden Engelska, 2017-05-18
98
Köp
Spara som favorit
Finns även som
Visa alla 8 format & utgåvor
One of the most irrepressible and exuberant characters in the history of literature, Tom Sawyer explodes onto the page in a whirl of bad behaviour and incredible adventures. Whether he is heaving clods of earth at his brother, faking a gangrenous toe, or trying to convince the world that he is dead, Tom's infectious energy and good humour shine through. Part of the Macmillan Collector's Library; a series of stunning, clothbound, pocket-sized classics with gold foiled edges and ribbon markers. These beautiful books make perfect gifts or a treat for any book lover. This edition of The Adventures of Tom Sawyer features an afterword by playwright and screenwriter Peter Harness.
Visa hela texten

Samuel Langhorne Clemens was born in Missouri in 1835. Early in his childhood, the family moved to Hannibal, Missouri - a town which would provide the inspiration for St Petersburg in Tom Sawyer and Huckleberry Finn. When he started writing in earnest in his thirties, he adopted the pseudonym Mark Twain (the cry of a Mississippi boatman taking depth measurements, meaning 'two fathoms'), and a string of highly successful publications followed. His later life, however, was marked by personal tragedy and sadness, as well as financial difficulty. In 1894, several businesses in which he had invested failed, and he was declared bankrupt. Over the next fifteen years he saw the deaths of two of his beloved daughters, and his wife. Increasingly bitter and depressed, Twain died in 1910, aged seventy-four.