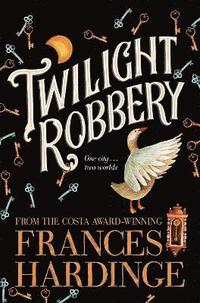 av Frances Hardinge
Häftad Engelska, 2018-02-08
99
Köp
Spara som favorit
Skickas inom 10-15 vardagar.
Fri frakt inom Sverige över 159 kr för privatpersoner.
Finns även som
Visa alla 1 format & utgåvor
Twilight Robbery is the extraordinary sequel to the award-winning Fly By Night by Costa winner Frances Hardinge. The city at night is a dangerous place . . . Mosca Mye and Eponymous Clent are in trouble again. Escaping disaster by the skin of their teeth, they find refuge in Toll, the strange gateway town where visitors may neither enter nor leave without paying a price. By day, the city is well-mannered and orderly; by night, it's the haunt of rogues and villains. Wherever there's a plot, there's sure to be treachery, and wherever there's treachery, there's sure to be trouble - and where there's trouble, Clent, Mosca and the web-footed apocalypse Saracen the goose can't be far behind. But as past deeds catch up with them and old enemies appear, it looks as if this time there's no way out . . . 'Everyone should read Frances Hardinge. Everyone. Right now' - Patrick Ness, author of A Monster Calls.
Visa hela texten

'Everyone should read Frances Hardinge. Everyone. Right now.' -- Patrick Ness

Frances Hardinge spent her childhood in a huge old house that inspired her to write strange stories from an early age. She read English at Oxford University, then got a job at a software company. However, by this time a persistent friend had finally managed to bully Frances into sending a few chapters of Fly By Night, her first children's novel, to a publisher. Macmillan made her an immediate offer. The book went on to publish to huge critical acclaim and win the Branford Boase First Novel Award. The sequel, Twilight Robbery, was shortlisted for the Guardian Children's Fiction Prize. She has also written many other highly acclaimed novels including Verdigris Deep, Cuckoo Song and the Costa Award winning The Lie Tree.