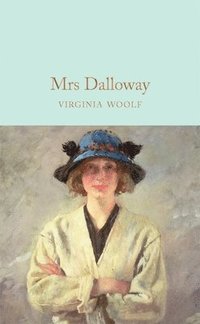 av Virginia Woolf
Inbunden Engelska, 2017-10-19
104
Köp
Spara som favorit
Finns även som
Visa alla 9 format & utgåvor
On a perfect June morning, Clarissa Dalloway - fashionable, worldly, wealthy, an accomplished hostess - sets off to buy flowers for the party she will host that evening. She is preoccupied with thoughts of the present and memories of the past, and from her interior monologue emerge the people who have touched her life. On the same day, Septimus Warren Smith, a shell-shocked survivor of the Great War, commits suicide, and casual mention of his death at the party provokes in Clarissa thoughts of her own isolation and loneliness. Bold and experimental, Virginia Woolf's Mrs Dalloway is a landmark in twentieth-century fiction and a book that gets better and better with every reading. This elegant Macmillan Collector's Library edition of Virginia Woolf's modernist classic features an afterword by editor and publisher Anna South. Designed to appeal to the booklover, the Macmillan Collector's Library is a series of beautiful gift editions of much loved classic titles. Macmillan Collector's Library are books to love and treasure.
Visa hela texten

Virginia Woolf was born in 1882, the youngest daughter of the Victorian writer Sir Leslie Stephen. She was educated at home with her sister, Vanessa, in a literary environment. The death of Woolf's mother in 1895 and her father in 1904 led to the first of the serious nervous breakdowns that would come to feature heavily in her life. Shortly afterwards she moved with her sister and two of her brothers to 46 Gordon Square, which was to be the first meeting place of the circle of writers and artists known as the Bloomsbury Group. In 1912 Virginia married Leonard Woolf, with whom she would later establish the Hogarth Press, and also published her first novel, The Voyage Out. It would be followed by eight others, including Mrs Dalloway (1925) and To the Lighthouse (1927), which together establish her position as one of the most important modernists of the twentieth century. Woolf committed suicide in 1941.