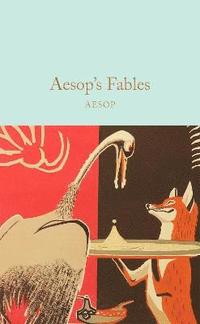 av Aesop
Inbunden Engelska, 2017-09-21
96
Köp
Spara som favorit
Finns även som
Visa alla 8 format & utgåvor
This timeless collection brings together three hundred of the most enduringly popular of Aesop's fables in a volume that will delight young and old readers alike. Here are all the age-old favourites - the wily fox, the vain peacock, the predatory cat and the steady tortoise - just as endearingly vivid and relevant now as they were for their very first audience. Designed to appeal to the booklover, the Macmillan Collector's Library is a series of beautiful gift editions of much loved classic titles. Macmillan Collector's Library are books to love and treasure. This elegant Macmillan Collector's Library edition of Aesop's Fables features an afterword by publisher and editor Anna South and illustrations by Arthur Rackham.
Visa hela texten

Although the three hundred fables in this collection are attributed to Aesop, and his name is synonymous with the form, it seems unlikely he was in fact anything more than a legendary figure. While some historical accounts maintain he was a slave with a prodigious talent for story-telling who lived during the sixth century BC, many believe it unlikely that this whole stock of fables can be attributed to one individual. However, what does seem clear is that the fables began their life as word-of-mouth stories long before being put down in writing.