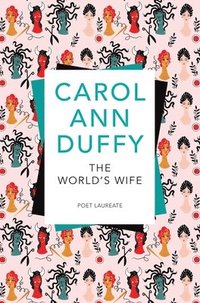 av Carol Ann Duffy Dbe
Häftad Engelska, 2017-07-13
152
Köp
Spara som favorit
Finns även som
Visa alla 1 format & utgåvor
This unique collection of poems from the Poet Laureate, filled with her characteristic wit, is a feminist classic and a modern take on age-old mythology. Who? Him. The Husband. Hero. Hunk. The Boy Next Door. The Paramour. The Je t'adore. Behind every famous man is a great woman - and from the quick-tongued Mrs Darwin to the lascivious Frau Freud, from the adoring Queen Kong to the long-suffering wife of the Devil himself, each one steps from her counterpart's shadow to tell her side of the story in this irresistible collection. Original, subversive, full of imagination and quicksilver wit, The World's Wife is Poet Laureate Carol Ann Duffy at her beguiling best.
Visa hela texten

Poignant, thoughtful, funny, rich and accessible -- Ruth Padel, Books of the Year * Guardian * These thirty poems vibrate with intense colloquialisms, physicality, energy, freshness and cheek. Many of them are very funny... the best are inventive, subversive and written with great rhythmical and rhyming dash * Sunday Telegraph * Carol Ann Duffy is a poet of skill, talent and great heart -- Erica Wagner The World's Wife is a joyous exuberant book of poems about women usually excluded from myth and history * Guardian * Duffy takes a cheeky, subversive, no-nonsense swipe with a dish clout at the famous men of history and myth. They don't have a chance in hell of dodging her quick-witted wallop as she relays their stories from their spouse's points of view * The Times * It sparkes with wit, intelligence and an impressive lightness of touch, while drawing on some weighty emotional experiences: loneliness, jealousy, self-loathing, desire, the fierceness of a mother's love -- Christina Patterson * Independent * She reveals the foibles of the great, the ghastly and the ordinary bloke and the sufferings of those closest to them. The result is a melange of history lesson, fairy-tale and modern-day domestic tragedy, with the occasional joke thrown in for good measure. . . Duffy's poetics are flawless - she never misses a beat, her pace is exhilarating, and her language is original and exciting * Scotsman * This book is going to be a hit, and can only consolidate Duffy's position as one of the most widely read British poets of her generation -- Robert Crawford * Herald *

Carol Ann Duffy lives in Manchester, where she is Professor and Creative Director of the Writing School at Manchester Metropolitan University. She has written for both children and adults, and her poetry has received many awards, including the Signal Prize for Children's Verse, the Whitbread, Forward and T. S. Eliot Prizes, the PEN Pinter Prize, and the Lannan and E. M. Forster Prize in America. She was appointed Poet Laureate in 2009. Her collections include Ritual Lighting, Love Poems, Rapture and The Bees which won the Costa Poetry Award.