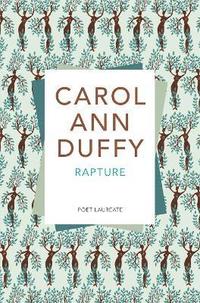 av Carol Ann Duffy Dbe
Häftad Engelska, 2017-07-13
141
Bevaka
Spara som favorit
Tillfälligt slut – klicka "Bevaka" för att få ett mejl så fort boken går att köpa igen.
Carol Ann Duffy is the most humane and accessible poet of our time, and Rapture is essential reading for the broken-hearted of all ages' - Rose Tremain The effortless virtuosity, directness, drama and humanity of Carol Ann Duffy's verse have made her our most admired and best-loved contemporary poet. Rapture, her seventh collection, is a book-length love-poem, and a moving act of personal testimony; but what sets these poems apart from other treatments of the subject is that Duffy refuses to simplify the contradictions of love, and read its transformations - infatuation, longing, passion, commitment, rancour, separation and grief - as simply redemptive or destructive. Rapture is a map of real love, in all its churning complexity. Yet in showing us that a song can be made of even the most painful episodes in our lives, Duffy has accessed a new level of directness that sacrifices nothing in the way of subtlety of expression. These are poems that will find deep rhymes in the experience of most readers, and nowhere has Duffy more eloquently articulated her belief that poetry should speak for us all.
Visa hela texten

Carol Ann Duffy is considered a top poet. But she deserves better. She deserves to outsell most of the novelists on your shelf * Observer * One of the most important, and rightly loved, poets of our time * Independent * It isn't often that I pick up a book of poems and read it straight through like a novel, but that is exactly what happened with Rapture. Read this book if you are in love, out of love or waiting for it to come along -- Daisy Goodwin * Mail on Sunday * Carol Ann Duffy is the most humane and accessible poet of our time, and Rapture is essential reading for the broken-hearted of all ages -- Rose Tremain, Books of the Year * Guardian *

Carol Ann Duffy lives in Manchester, where she is Professor and Creative Director of the Writing School at Manchester Metropolitan University. She has written for both children and adults, and her poetry has received many awards, including the Signal Prize for Children's Verse, the Whitbread, Forward and T. S. Eliot Prizes, and the Lannan and E. M. Forster Prize in America. She was appointed Poet Laureate of the United Kingdom in 2009. In 2011 The Bees won the Costa Poetry Award, and in 2012 she won the PEN Pinter Prize. She was made a DBE in the 2015 New Year Honours list.