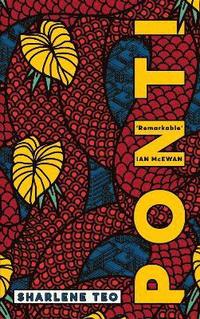 av Sharlene Teo
Inbunden Engelska, 2018-04-19
169
Köp
Spara som favorit
Skickas inom 7-10 vardagar.
Fri frakt inom Sverige för privatpersoner.
Finns även som
Visa alla 3 format & utgåvor
Shortlisted for the Edward Stanford Fiction with a Sense of Place Award. Longlisted for the Jhalak Prize. 'Remarkable . . . her characters glow with life and humour' Ian McEwan 2003. Singapore. Friendless and fatherless, sixteen-year-old Szu lives in the shadow of her mother Amisa, once a beautiful actress and now a hack medium performing seances with her sister in a rusty house. When Szu meets the privileged, acid-tongued Circe, they develop an intense friendship which offers Szu an escape from her mother's alarming solitariness, and Circe a step closer to the fascinating, unknowable Amisa. Seventeen years later, Circe is struggling through a divorce in fraught and ever-changing Singapore when a project comes up at work: a remake of the cult seventies horror film series `Ponti', the very project that defined Amisa's short-lived film career. Suddenly Circe is knocked off balance: by memories of the two women she once knew, by guilt, and by a past that threatens her conscience . . . Told from the perspectives of all three women, Ponti by Sharlene Teo is an exquisite story of friendship and memory spanning decades. Infused with mythology and modernity, with the rich sticky heat of Singapore, it is at once an astounding portrayal of the gaping loneliness of teenagehood, and a vivid exploration of how tragedy can make monsters of us. Shortlisted for Hearsts' Big Book Award 2018.
Visa hela texten

The story, told with dark humor by an exciting new voice, navigates the intricacies and weirdness of human connections, and the impressions they leave behind * Huffington Post * On their own, Teo's sharp characterizations and setting-so alive that the book seems to create its own, humid microclimate-would set this book apart. Add to that her imaginative plot, prose that turns from humor to devastation on a dime, and original storytelling, and Ponti is a beyond-promising debut. * Booklist (starred review) * Ponti by Sharlene Teo is a sultry, hilarious dissection of mother-daughter relationships, and the effect of time and teenagehood on friendships, against the backdrop of Singapore B-movies. It oozes confidence. -- Nikesh Shukla * Guardian, Best summer books 2018 * Funny, achingly dark and drawn with scalpel-like precision, Ponti is one of the wittiest debut novels of 2018 * The Pool * Exquisite, lush and menacing . . . the Singapore in Sharlene Teo's Ponti is vivid and immediate, its people complex, beautifully sketched and captivating . . . colourful and bewitching * TLS * Ponti's cultural commentary and multi-generational chorus of voices do indeed recall White Teeth [by Zadie Smith], while its unflinching depiction of young female friendship echoes Smith's most recent, Swing Time . . . by the time the novel has finished, there is no denying Amisa's dream has been realised. These three women and their stories will live on; they have been made immortal. * Independent Ireland * You know those books you can read again? And again? And again? Well, prepare for Sharlene Teo's incredible Ponti . . . a densely layered story of a fading horror actress, Amisa; her unhappy teenage daughter, Szu and her acid-tongued best friend, Circe, which jumps from generations, decades and viewpoints, weaving in unsettling myths to boot . . . entrancing . . . A modern gem * Emerald Street * Teo's portrait of Singapore is so good it would not be a surprise if Ponti were a contender for the next Ondaatje Prize, awarded to a work that best evokes "spirit of a place". People talk about "the great American novel", or, in Britain, "the state of the nation novel". Ponti is a great Singaporean novel, and a marvelous investigation of the state of the tiny island nation * South China Morning Post * A sticky, atmospheric tale of resentment and loneliness * Tatler * Teo's debut stands out from the crowd . . . the offbeat charm of this lush tale proves a stealthy delivery mechanism for a quiet tragedy of intergenerational misunderstanding * Metro * Ponti is darkly hilarious. It offers up all the anxiety, snark, sadness, and wonder of being a teenager. Teo guides us through the grunge of growing up. She asks what it means to be a monster and what it means to be beautiful. Is it possible to be both? -- Rowan Hisayo Buchanan, author of <i>Harmless Like You</i> The loneliness of adolescence is a monstrosity manifesting in equally ugly and poetic ways. Ponti is a weird and beautiful bildungsroman and Teo's writing shines as totally radical * The Skinny * Teo's vivid, disquieting debut is set in sweltering Singapore . . . a sparky but sad book, charting faltering mother-daughter relationships and the intensity of teenage friendships, while explaining how past mistakes can creep into conscience years later * Daily Mail * Spanning 17 years and told from the perspectives of all three women, Ponti is a stunning first novel with a wry, rebellious heart * AnOther * Strange and compelling . . . a breath of fictional fresh air -- Shena Mackay, Kate Summerscale, and Owen Sheers, judges of the Deborah Rogers Writers Award This haunting debut hopscotches between decades and cultures, eschewing the usual moves of the coming-of-age story for something truer to the desperate, surreal stakes of adolescence. Sharlene Teo is a daring and genuinely original novelist -- Garth Greenwell, author of <i>What Belongs to You</i> Witty,