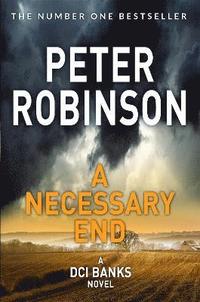 Köp
Spara som favorit
Kan levereras innan julafton!
Finns även som
Visa alla 2 format & utgåvor
'The Alan Banks mystery-suspense novels are the best series on the market. Try one and tell me I'm wrong.' - Stephen King. A Necessary End is the third novel in Peter Robinson's Inspector Banks series, following on from A Dedicated Man. Peace destroyed. Lives in ruin. Banks must race to find the killer . . . Everyday life in Eastvale is shattered when a policeman is stabbed to death after an anti-nuclear demonstration turns violent. Superintendent 'Dirty Dick' Burgess, Banks's nemesis, descends with vengeful fury on those he deems responsible. Inspector Banks is uneasy about Burgess's mishandling of the case, but despite being warned off he puts his career in jeopardy to continue his search for the truth, knowing if he is to keep his job, he must beat Burgess to the killer . . . Now a major British ITV drama DCI Banks, this novel is followed by the fourth book in this Yorkshire-based crime series, The Hanging Valley.
Visa hela texten

Inspector Banks - a man for all seasons, he knows that often the answers to the clues he seeks are hidden in his own heart -- Michael Connelly An award-winning writer with ideas that are imaginative and plots that are refreshingly cliche-free * Time Out * If you haven't caught up with Peter Robinson already, now is the time to start * Independent on Sunday *

Peter Robinson is author of twenty-four books in the Number One Bestselling DCI Banks series as well as two collections of short stories and three standalone novels, including the Number One bestseller Before The Poison. Peter's critically acclaimed crime novels have won numerous awards in Britain, the United States, Canada and Europe, and are published in translation all over the world. Peter's DCI Banks was a major ITV1 drama by Left Bank productions. Stephen Tompkinson (Wild at Heart, Ballykissangel) plays Inspector Banks, and Andrea Lowe (The Bill, Murphy's Law) plays DI Annie Cabbot. Peter's standalone novel Before the Poison won the IMBA's 2013 Dilys Award as well as the 2012 Arthur Ellis Award for Best Novel by the Crime Writers of Canada. This was Peter's sixth Arthur Ellis award. Peter Robinson grew up in Yorkshire, and lived between Richmond and Canada. He died in October 2022.