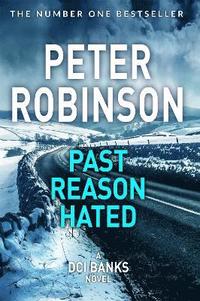 av Peter Robinson
Häftad Engelska, 2018-12-27
129
Köp
Spara som favorit
Finns även som
Visa alla 2 format & utgåvor
'The Alan Banks mystery-suspense novels are the best series on the market. Try one and tell me I'm wrong' Stephen King Past Reason Hated is the fifth novel in Peter Robinson's bestselling Inspector Banks series. A BRUTAL KILLING. NUMEROUS SUSPECTS. BANKS MUST UNCOVER THE TRUTH. It should have been a cosy scene - log fire, sheepskin rug, Vivaldi on the stereo, Christmas lights and tree. But appearances can be deceptive. For Caroline Hartley, lying quietly on the couch, has been brutally murdered. Inspector Alan Banks is called to the grim scene. And he soon has more suspects than he ever imagined. As he delves into her past, he realizes that for Caroline, secrecy was a way of life, and her death is no different. His ensuing investigation is full of hidden passions and desperate violence . . . Past Reason Hated is followed by Wednesday's Child in the Inspector Banks series.
Visa hela texten

Peter Robinson grew up in Yorkshire and now lives in Canada. His Inspector Banks series has won numerous awards in Britain, Europe, the United States and Canada and was adapted into the major British ITV drama DCI Banks starring Stephen Tompkinson. Aftermath, the twelfth in the series, was a Sunday Times bestseller.