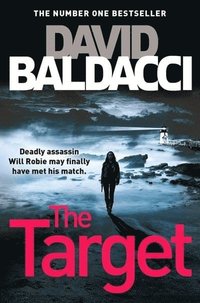 av David Baldacci
(1 röst)
Häftad Engelska, 2018-11-15
131
Köp
Spara som favorit
Finns även som
Visa alla 1 format & utgåvor
The Target is David Baldacci's blockbuster follow up to The Hit, the smash-hit bestseller featuring U.S. government assassin, Will Robie. A highly trained CIA assassin, Will Robie is only matched in his ability to kill by his fellow agent, Jessica Reel. They are trusted by the US government to succeed when failure isn't an option. So when the President identifies an opportunity to take down a global menace there's only two people he has in mind for the clandestine mission. Their target is the dangerous and unpredictable leader of North Korea, but when things don't go to plan a fierce retaliation is set in motion. While Robie and Reel are stalked by a new adversary - sent to destroy the enemy at all costs - a deadly game of cat and mouse is triggered between the East and West. But who will be hunter and who will be hunted when the true target is revealed? Continue the thrilling series with The Guilty.
Visa hela texten

The page-turner of the season * The Times * Baldacci is still peerless * Sunday Times * One of the world's biggest-selling thriller writers, Baldacci needs no introduction . . . Brilliant plotting, heart-grabbing action and characters to die for * Daily Mail * Baldacci inhabits the skin of his creations - tripping us up with unexpected empathy and subtle identification * Sunday Express *

David Baldacci is a worldwide bestselling novelist. His books are published in over forty-five languages and in more than eighty countries, and have been adapted for both feature film and television. Whilst researching his novels, David Baldacci has been inside the buildings of some of the world's leading intelligence agencies, meeting real-life spies and intelligence leaders. Some of his bestselling novels include Absolute Power, The Camel Club, Memory Man and, also featuring Will Robie, The Innocent, The Hit, and The Guilty. David is also the co-founder, along with his wife, of the Wish You Well Foundation (R), a nonprofit organization dedicated to supporting literacy efforts across America.