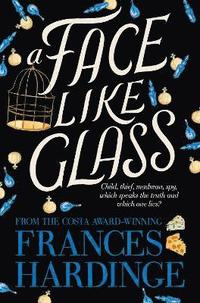 av Frances Hardinge
Häftad Engelska, 2018-02-08
99
Köp
Spara som favorit
Finns även som
Visa alla 2 format & utgåvor
A Face Like Glass is an astonishing and imaginative novel from the Costa Award winning author of The Lie Tree, Frances Hardinge. In the underground city of Caverna the world's most skilled craftsmen toil in the darkness to create delicacies beyond compare - wines that can remove memories, cheeses that can make you hallucinate and perfumes that convince you to trust the wearer, even as they slit your throat. The people of Caverna are more ordinary, but for one thing: their faces are as blank as untouched snow. Expressions must be learned, and only the famous Facesmiths can teach a person to show joy, despair or fear - at a price. Into this dark and distrustful world comes Neverfell, a little girl with no memory of her past and a face so terrifying to those around her that she must wear a mask at all times. For Neverfell's emotions are as obvious on her face as those of the most skilled Facesmiths, though entirely genuine. And that makes her very dangerous indeed . . . 'Everyone should read Frances Hardinge. Everyone. Right now.' - Patrick Ness, author of A Monster Calls.
Visa hela texten

Frances Hardinge spent her childhood in a huge old house that inspired her to write strange stories from an early age. She read English at Oxford University, then got a job at a software company. However, by this time a persistent friend had finally managed to bully Frances into sending a few chapters of Fly By Night, her first children's novel, to a publisher. Macmillan made her an immediate offer. The book went on to publish to huge critical acclaim and win the Branford Boase First Novel Award. Known for her beautiful use of language, she has since written many critically acclaimed novels, including Verdigris Deep, Cuckoo Song, and the Costa Award-winning The Lie Tree.