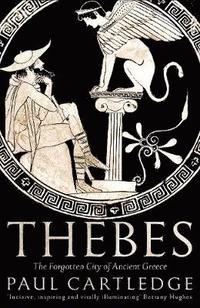 The Forgotten City of Ancient Greece

av Paul Cartledge
Inbunden Engelska, 2020-11-12
239
Köp
Spara som favorit
Skickas inom 7-10 vardagar.
Gratis frakt inom Sverige över 159 kr för privatpersoner.
Finns även som
Visa alla 3 format & utgåvor
'An incisive, inspiring and vitally illuminating account of a city which changed the ancient world and which deserves to be remembered by the modern. A masterful book written by a master historian.' - Bettany Hughes, bestselling author of Istanbul and Helen of Troy. Continuously inhabited for five millennia, and at one point the most powerful city in Ancient Greece, Thebes has been overshadowed by its better-known rivals, Athens and Sparta. According to myth, the city was founded when Kadmos sowed dragon's teeth into the ground and warriors sprang forth, ready not only to build the fledgling city but to defend it from all-comers. It was Hercules' birthplace and the home of the Sphinx, whose riddle Oedipus solved, winning the Theban crown and the king's widow in marriage, little knowing that the widow was his mother, Jocasta. The city's history is every bit as rich as its mythic origins, from siding with the Persian invaders when their emperor, Xerxes, set out to conquer Aegean Greece, to siding with Sparta - like Thebes an oligarchy - to defeat Pericles' democratic Athens, to being utterly destroyed on the orders of Alexander the Great. In Thebes: The Forgotten City of Ancient Greece, the acclaimed classical historian Paul Cartledge brings the city vividly to life, and argues that it is central to our understanding of the ancient Greeks' achievements - whether politically or culturally - and thus to our own culture and civilization.
Visa hela texten

Thebes has all but slipped from cultural consciousness. Or so it had. In this new book, Paul Cartledge, the former AG Leventis professor of Greek culture at the University of Cambridge, with his usual charm and erudition, fights to 'rescue it, permanently, from oblivion'. -- Catherine Nixey * BBC History Magazine * Cartledge deserves full credit for his spirited and readable attempt to put Thebes back on the map. -- Peter Thonemann * TLS * An incisive, inspiring and vitally illuminating account of a city which changed the ancient world and which deserves to be remembered by the modern. A masterful book written by a master historian. -- Bettany Hughes, bestselling author of <i>Istanbul </i>and <i>Helen of Troy.</i> Paul Cartledge has done it again - he has shone a light on a crucial epicentre of ancient Greek affairs that so often gets overshadowed by the might of Athens. He does it with assured scholarship, a clear and engaging style, and more than a hint of humour. Thebes is lucky to have Cartledge as its champion! -- Michael Scott Excellent ... rich and detailed * London Review of Books * The great value of this book is that is enables us to see the Thebans not through the eyes of their enemies, but as they themselves would have wished to be seen. -- Tom Holland * BBC History 'Books of the year' * Paul Cartledge's gripping new book reconstructs an ancient city that was once the near equal of Athens and Sparta, but left behind no Thucydides to tell its story ... Cartledge's Thebes has let me see a familiar subject, ancient Greece, in a fundamentally new way. -- Rana Mitter * History Today * Will delight anyone that is interested in ancient Greece and the Classical world more generally. An outstanding work by a scholar of justifiable world renown. -- Mark Merrony * Antiquus * 'The Forgotten City', as Cambridge professor Paul Cartledge calls it in his engaging new history, nonetheless was of enormous political and cultural importance . . . One of the many strengths of Cartledge's book is the way it illustrates how hearsay, history and myth combined to form the basis of Theban culture . . . Cartledge's great achievement is to solve the riddle of why Thebes disappeared and put the ancient city back on the map. -- Daisy Dunn * Literary Review * Cartledge, matching his unrivalled command of the complex, fragmentary and often contradictory sources to his talents as a storyteller, traces the arc of the Theban story as well as anyone is likely to do. -- Tom Holland * Spectator *

Paul Cartledge is A.G. Leventis Senior Research Fellow of Clare College, Cambridge, and emeritus A.G. Leventis Professor of Greek Culture in the Faculty of Classics, where he taught from 1979 to 2014. His undergraduate and doctoral qualifications were obtained at Oxford, where he completed a dissertation on the archaeology and history of early Sparta under the supervision of Professor Sir John Boardman. He is the author, co-author, editor or co-editor of well over a score of books, including The Cambridge Illustrated History of Ancient Greece; The Spartans: An Epic History; Alexander the Great: The Hunt for a New Past; Thermopylae: The Battle that Changed the World; and Democracy: A Life. He co-edits a monograph series, sits on the editorial boards of three learned journals, and serves as consultant in ancient history to publishers on both sides of the Atlantic. He is a Fellow of the Society of Antiquaries of London and an Honorary Citizen of Sparta, Greece, and holds the Gold Cross of the Order of Honour awarded by the President of the Hellenic Republic.