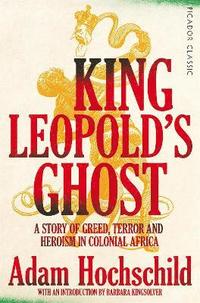 A Story of Greed, Terror and Heroism in Colonial Africa

av Adam Hochschild
Häftad Engelska, 2019-03-07
136
Köp
Spara som favorit
Finns även som
Visa alla 3 format & utgåvor
Winner of the Duff Cooper Prize, King Leopold's Ghost is the true and haunting account of Leopold's brutal regime and its lasting effect on a ruined nation. With an introduction by award-winning novelist Barbara Kingsolver. In the late nineteenth century, when the great powers in Europe were tearing Africa apart and seizing ownership of land for themselves, King Leopold of Belgium took hold of the vast and mostly unexplored territory surrounding the Congo River. In his devastatingly barbarous colonization of this area, Leopold stole its rubber and ivory, pummelled its people and set up a ruthless regime that would reduce the population by half. While he did all this, he carefully constructed an image of himself as a deeply feeling humanitarian. King Leopold's Ghost is the inspiring and deeply moving account of a handful of missionaries and other idealists who travelled to Africa and unwittingly found themselves in the middle of a gruesome holocaust. Instead of turning away, these brave few chose to stand up against Leopold. Adam Hochschild brings life to this largely untold story and, crucially, casts blame on those responsible for this atrocity. 'All the tension and drama that one would expect in a good novel' - Robert Harris, author of Fatherland
Visa hela texten

All the tension and drama that one would expect in a good novel -- Robert Harris A history like none other . . . an amazing book -- Tariq Ali * Financial Times *

Adam Hochschild teaches writing at the Graduate School of Journalism at the University of California at Berkeley. He lives in San Francisco with his wife. He is the author of Spain in Our Hearts: Americans in the Spanish Civil War, 1936-1939 and King Leopold's Ghost: a Story of Greed, Terror and Heroism in Colonial Africa which won the Duff Cooper Prize in the UK, the Lionel Gelber Prize in Canada and was a finalist for the 1998 National Book Critics Circle Award in the United States.