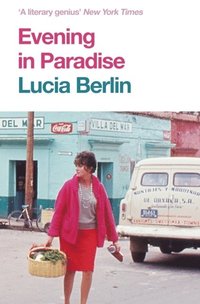 av Lucia Berlin
Häftad Engelska, 2019-09-05
141
Köp
Spara som favorit
Finns även som
Visa alla 4 format & utgåvor
The chance to join 'the Revival of the Great Lucia Berlin' (New York Times) From the author of A Manual for Cleaning Women. Ranging from Texas, to Chile, to New Mexico and New York, in Evening in Paradise Berlin writes about the good, the bad and everything in between: struggling young mothers, husbands who pack their bags and leave in the middle of the night, wives looking back at their first marriage from the distance of their second . . . The publication of A Manual for Cleaning Women, Lucia Berlin's dazzling collection of short stories, marked the rediscovery of a writer whose talent had gone unremarked by many. The incredible reaction to Lucia's writing - her ability to capture the beauty and ugliness that coexist in everyday lives, the extraordinary honesty and magnetism with which she draws on her own history to breathe life into her characters - included calls for her contribution to American literature to be as celebrated as that of Raymond Carver. Evening in Paradise is a careful selection from Lucia Berlin's remaining stories - a jewel-box follow-up for her hungry fans.
Visa hela texten

Wonderful . . . Brilliant * Times * [Evening in Paradise] shines with compassion and dark wit . . . raw, elliptical, devilishly funny tales. * Observer * A writer of tender, chaotic and careworn short stories. Her work can remind you of Raymond Carver's or Grace Paley's or Denis Johnson's . . . One thing that makes Berlin so valuable is her gift for evoking the sweetness and earnestness of young women who fall in love . . . Berlin probably deserved a Pulitzer Prize. -- Dwight Garner * New York Times * A fearless storyteller . . . [Berlin's] work is testimony to a kaleidoscopic life that would scare the sh*t out of most writers alive today. I adore her. -- Eli Goldstone, author of <i>Strange Heart Beating</i> Lucia Berlin is a genius and the swerves of her sentences sublime. -- Lucy Caldwell Thank god for the posthumous revival of Lucia Berlin - how sad it would be to have never experienced her distinctive, vibrant voice . . . utterly captivating. * Buzzfeed (Best Books of Fall 2018) * Berlin's stories, largely autobiographical tales of working class life in the American West, slipped beneath the radar in her lifetime but galvanized contemporary readers. Now we have a second, smaller volume that is every bit as good as its predecessor. If you've never read Berlin, now's your chance. * Newsday * Berlin . . . is a master at capturing women in states of disintegration: those who are being damaged, physically or emotionally, by men; those who are immersed in scandal or disdained by society; and those who are intentionally self-destructing. Her oeuvre contains, among lots of other things, a profound record of what shame, trauma, and hanging on by your fingernails looked like on a particular woman-or a particular kind of woman-half a century ago. * Atlantic * Wonderful . . . Berlin's writing achieves a dreamy, delightful effect as it provides a look back through time. This collection should further bolster Berlin's reputation as one of the strongest short story writers of the 20th century. * Publishers Weekly (starred review) * Blessedly, a second volume with 22 more stories is in no way second rate but rather features more seductive, sparkling autofiction with narrators whose names echo the author's in settings and situations that come from her roller-coaster biography . . . No dead author is more alive on the page than Berlin: funny, dark, and so in love with the world. * Kirkus (starred review) * Any publication of hers is a major cause for celebration, as far as I'm concerned. -- Maggie O'Farrell * Guardian, Best summer books 2018 * [Berlin's] spare evocative language and lithe turn of phrase make each phrase quietly extraordinary. * The Scotsman * In Evening in Paradise - which reads like novel-in-stories-Berlin shows that she was a master of the short story . . . This book is so transportative, so wonderful. -- Favourite Books of 2018 * LitHub * There's always an audacious humour and humanity to [Berlin's] writing. * Red * Berlin expertly balances beauty and bleakness, and finds drama, joy or revelation in humdrum experiences . . . Berlin once again makes original art from her chequered life . . . When the words flowed, Berlin managed to perform small miracles with them. * Economist * You might assume that these represent the crumbs from the table, the ones not good enough to make the first volume, but that's not the case . . . you can't keep a good stylist down, and an authentic voice begins to come through. -- John Self * Irish Times * Lucia Berlin writes in colour. Not wishy-washy pastels, or hues described with copious adjectives, but instead saturated colour . . . Berlin looks for other ways to think about women's lives, freed from simple explanations. * TLS * Berlin's fiction subtly complicates what it meant to be an American in the latter half of the last century . . . The stories in Evening in Paradise, Berlin's second posthumous collection, are filled again with shabby rooms and shabbier lives . . . There i

Lucia Berlin (1936-2004) worked brilliantly but sporadically throughout the 1960s, 1970s, and 1980s. Her stories are inspired by her early childhood in various Western mining towns; her glamorous teenage years in Santiago, Chile; three failed marriages; a lifelong problem with alcoholism; her years spent in Berkeley, New Mexico, and Mexico City; and the various jobs she held to support her writing and her four sons. Sober and writing steadily by the 1990s, she took a visiting writer's post at the University of Colorado in Boulder in 1994 and was soon promoted to associate professor. In 2001, in failing health, she moved to Southern California to be near her sons. She died in 2004 in Marina del Rey. Lucia's books include A Manual for Cleaning Women, Welcome Home, and Evening in Paradise.