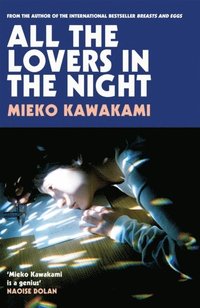 All The Lovers In The Night

av Mieko Kawakami
Häftad Engelska, 2022-05-12
193
Köp
Spara som favorit
Finns även som
Visa alla 5 format & utgåvor
'Mieko Kawakami is a genius' - Naoise Dolan, author of Exciting Times 'Compact and supple, it's a strikingly intelligent feat.' - The New York Times Book Review From international literary sensation Mieko Kawakami comes All The Lovers In The Night, an extraordinary, deeply moving and insightful story set in contemporary Tokyo. Fuyuko Irie is a freelance proofreader in her thirties. Living alone, and unable to form meaningful relationships, she has little contact with anyone other than Hijiri, someone she works with. When she sees her reflection, she's confronted with a tired and spiritless woman who has failed to take control of her own life. Her one source of solace: light. Every Christmas Eve, Fuyuko heads out to catch a glimpse of the lights that fill the Tokyo night. But it is a chance encounter with a man named Mitsutsuka that awakens something new in her. And so her life begins to change. As Fuyuko starts to see the world in a different light, painful memories from her past begin to resurface. Fuyuko needs to be loved, to be heard, and to be seen. But living in a small world of her own making, will she find the strength to bring down the walls that surround her? All The Lovers In The Night is acute and insightful, entertaining and captivating, pulsing and poetic, modern and shocking. It's another unforgettable novel from Japan's most exciting writer. Translated from the Japanese by Sam Bett and David Boyd.
Visa hela texten

Kawakami's novel is uncompromisingly candid in its appraisal of the harm women inflict on one another, while never losing sight of the overarching structures that lead them to do so in the first place. Compact and supple, it's a strikingly intelligent feat. * The New York Times Book Review * Her most accomplished novel yet . . . A contemporary Japanese master continues her meteoric rise into our literary firmament -- <span>Hamilton Cain</span> * Oprah Daily (A Most Anticipated Book of 2022) * [An] engrossing, fine-boned new novel, deftly translated from Japanese by Sam Bett and David Boyd . . . with this consummate novel, Kawakami's star continues to rise, pulsing against a night that's anything but holy -- Hamilton Cain * The Washington Post * Kawakami - the author of titles such as Breasts and Eggs and Heaven - has crafted another atmospheric, subtly beautiful novel. * TIME Magazine (A Most Anticipated Book of May 2022) * Kawakami has an effortless way of turning the mundanity of Fuyoko's day-to-day into detailed occasions that I want to know more about . . . Though the everyday is more interesting than you'd think, this is a book that's really about Fuyoko discovering happiness * Stylist * In contrast to the many suffocating (western) conventions of romantic storytelling, it is refreshing to encounter a book of such irresistible sweet melancholy. * The Irish Times * Kawakami has created a rich and notable examination of the varied ways women choose to live their lives and the gains and losses that come with the choices they've made. Kawakami writes with the tender and incisive sensibilities of a poet . . . An unforgettable and masterful work. * Kirkus Reviews (Starred Review) * Candid and searing, Kawakami's latest is another brilliantly rendered portal into young women's lives. * Booklist (Starred Review) * The author dazzles with her exploration of emotions . . . An invigorating and empowering portrait. It's a winner. * Publishers Weekly (Starred Review) * Mieko Kawakami has emerged as a literary feminist icon . . . Deftly translated by Sam Bett and David Boyd, her prose retains the accessibility of a blog, with glimpses of lyricism. * Financial Times * From the celebrated author of Breasts and Eggs comes Kawakami's most accomplished novel yet, plumbing the ennui of Fuyuko, an anxiety-prone proofreader who is something of a social misfit. * Oprah Daily *

Mieko Kawakami is the author of the internationally bestselling novel Breasts and Eggs, a New York Times Notable Book of the Year and one of TIME's Best 10 Books of 2020. Born in Osaka, Kawakami made her literary debut as a poet in 2006, and published her first novella, My Ego, My Teeth, and the World, in 2007. Her writing is known for its poetic qualities and its insights into the female body, ethical questions, and the dilemmas of modern society. Her works have been translated into many languages and are available all over the world. She has received numerous prestigious literary awards in Japan for her work, including the Akutagawa Prize, the Tanizaki Prize, and the Murasaki Shikibu Prize. She lives in Tokyo, Japan.