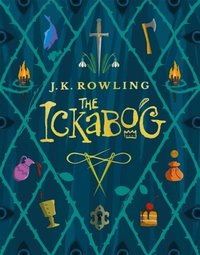 av J K Rowling
(3 röster)  |  Läs 1 recension
Inbunden Engelska, 2020-11-10
6-9 år
213
Köp
Spara som favorit
The Ickabog is coming... A mythical monster, a kingdom in peril, an adventure that will test two children's bravery to the limit. Discover a brilliantly original fairy tale about the power of hope and friendship to triumph against all odds, from one of the world's best storytellers. The kingdom of Cornucopia was once the happiest in the world. It had plenty of gold, a king with the finest moustaches you could possibly imagine, and butchers, bakers and cheesemongers whose exquisite foods made a person dance with delight when they ate them. Everything was perfect - except for the misty Marshlands to the north which, according to legend, were home to the monstrous Ickabog. Anyone sensible knew that the Ickabog was just a myth, to scare children into behaving. But the funny thing about myths is that sometimes they take on a life of their own. Could a myth unseat a beloved king? Could a myth bring a once happy country to its knees? Could a myth thrust two children into an adventure they didn't ask for and never expected? If you're feeling brave, step into the pages of this book to find out... A beautiful hardback edition, perfect for sharing and gift-giving. Brought to life with full-colour illustrations by the young winners of The Ickabog Illustration Competition.
Visa hela texten

[A] handsome volume...this is zinging storytelling with bite and a twist. It also has extraordinarily skilled and apt illustrations. -- Nicolette Jones * The Sunday Times * 'A] gripping fairy tale, complete with delightful illustrations from young fans....ultimately it is a tale of good triumphing over evil, and a tribute to the power of hope and friendship. Surely set to become a classic. Children's Book of the Week * Press Association * JK is back in children's territory with this glorious fairytale that has just the right mix of silliness and peril. It's peppered by children's drawings (those who won The Ickabog Illustration Competition this summer) and lends itself to being read aloud. * MuddyStilettos.co.uk * Her imagination is a marvel and her plotting ever-sophisticated in what could otherwise be deemed a simple tale....The illustration are thrilling, well chosen and a breath of fresh air. It's hard to put an age range on this book which, if read aloud, could captivate children as young as four or five, but will be lapped up especially by seven to ten-year-olds and entranced this 47-year-old. * The Times * Rowling's fairytale, first conceived as a bedtime story for her young children and released online chapter by chapter during lock down, gets a lavish hardback publication with illustrations by child readers from around the world. * The Guardian * An original fairy tale written by one of the nations favourite authors. A great addition to your children's reading collection, but an equally good read for adults who loved the Harry Potter series. Mythical creatures, horrible monsters and a perfectly happy kingdom called Cornucopia - what ever could go wrong? * The Mirror * High suspense, a glorious cast of villains, and plenty of jokes * The Daily Telegraph * This original fairytale by JK Rowling is about the power of hope and friendship to triumph against all odds. * Financial Express * JK Rowling at the height of her powers: charming, imaginative, big ideas for small people as fabulous characters - from little Daisy Dovetail to snivelling Lord Spittleworth - come up against villains both real and imagined...Rowling began her journey with The Ickabog by reading her children a chapter each night. Aimed at readers between seven and nine, it's "best read aloud", for its lyricism and cliff-hangers both. * inews * Thanks to COVID-19, JK Rowling rediscovered an unfinished tale that she had written for her own children ten years ago "in fits and starts" between the seven Harry Potter books. During lockdown she put it online for free, inviting the millions of children stuck at home around the world to contribute illustrations. Now, and in our darkest hour, it is published; and just like Harry Potter, it is a light for when other lights go out.... The winning illustrations by children of 7-11 from Australia, New Zealand, India, Ireland and Britain are a delightful touch, and royalties are donated to the Volant Charitable Trust to assist groups particularly hurt by Covid-19. Rowling has written some entertaining novels for adults, but it is as a children's writer that she has achieved phenomenal world-wide fame. The Ickabog won't just be put under every lucky child's Christmas tree: it is a monster hit that deserves to be. * Evening Standard * Coronavirus has touched everything, and children's literature reflects this sooner than other forms. Many have been gripped by JK Rowling's online children's novel, The Ickabog (ages 6+), published in print this autumn by Little, Brown. With King Fred's country in the grip of lies, corruption, murder and incompetence, it is a strangely relevant and darkly funny treat. * New Statesman * J.K. Rowling has written a book for children - and you know what? It's a charmer. The Ickabog was created for her own children between the Harry Potter books (how does she do it?) and was stashed away until the arrival of Covid, when she found that children were stuck indoors without much to

J.K. Rowling is the author of the seven Harry Potter books, which have sold over 500 million copies, been translated into over 80 languages, and made into eight blockbuster films. She also wrote three short series companion volumes for charity, including Fantastic Beasts and Where to Find Them, which later became the inspiration for a new series of films. Harry's story as a grown-up was later continued in a stage play, Harry Potter and the Cursed Child, which J.K. Rowling wrote with playwright Jack Thorne and director John Tiffany. In 2020, she returned to publishing for younger children with the fairy tale The Ickabog, which she initially published for free online for children in lockdown, later donating all her book royalties to help vulnerable groups affected by the Covid-19 pandemic. J.K. Rowling has received many awards and honours for her writing, including for her detective series written under the name Robert Galbraith. She supports a wide number of humanitarian causes through her charitable trust Volant, and is the founder of the children's care reform charity Lumos. For as long as she can remember, J.K. Rowling wanted to be a writer, and is at her happiest in a room, making things up. She lives in Scotland with her family.