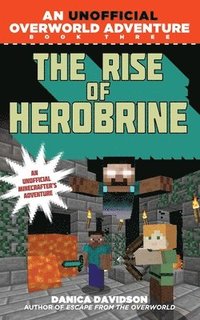 The Rise of Herobrine

av Danica Davidson
Häftad Engelska, 2016-05-05
119
Köp
Spara som favorit
Finns även som
Visa alla 1 format & utgåvor
Stevie has been having repeated nightmares about the mysterious figure known as "Herobrine." Some say Herobrine is an old ghost story. Some say he's a virus. But no one believes he is real except maybe Stevie, whose nightmares are telling him that Herobrine is going to take over the Overworld. His cousin Alex has come to visit, and during one of her explorations, she finds a music disc that predicts the destruction of the Overworld! Are Stevie's nightmares and the music disc connected? Stevie and Alex hook up with Stevie's best friend Maison, and the three quickly begin looking for answers. While they look, Herobrine is drawing ever closer. Someone is stealing the villagers' most precious belongings, including Stevie's cat, Ossie. People are angry and turning against one another. And there are mysterious signs appearing around the Overworld. Stevie, Maison, and Alex must unearth more music discs, piece together clues from the nightmares, and, ultimately, confront Herobrine the most feared being of all at his dark home in an abandoned temple high atop a forbidding mountain. The fate of the Overworld is depending on them. Sky Pony Press, with our Good Books, Racehorse and Arcade imprints, is proud to publish a broad range of books for young readers picture books for small children, chapter books, books for middle grade readers, and novels for young adults. Our list includes bestsellers for children who love to play Minecraft; stories told with LEGO bricks; books that teach lessons about tolerance, patience, and the environment, and much more. In particular, this adventure series is created especially for readers who love the fight of good vs. evil, magical academies like Hogwarts in the Harry Potter saga, and games like Minecraft, Terraria, and Pokemon GO. While not every title we publish becomes a New York Times bestseller or a national bestseller, we are committed to books on subjects that are sometimes overlooked and to authors whose work might not otherwise find a home.
Visa hela texten

Danica Davidson has written for MTV, The Onion, the Los Angeles Times and about fifty other publications. She is the author of two previous books in the Overworld series, Escape from the Overworld and Attack on the Overworld.