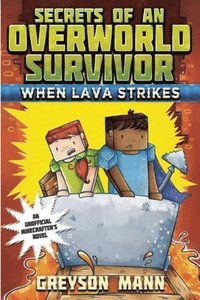 Secrets of an Overworld Survivor, #2

av Greyson Mann
Häftad Engelska, 2017-02-02
79
Köp
Spara som favorit
Finns även som
Visa alla 2 format & utgåvor
What is more fun than Minecraft? For boys and girls who love the game, not much, except maybe an exciting adventure that takes place within the Minecraft universe! When Will and Mina discover an abandoned mine shaft, they quickly plan a treasure hunt. The two friends dream of the riches they'll unearth together and can't wait to get started, but they quickly discover that they very different ideas about what treasure is! Torn between searching for mobs and potion supplies and seeking out the chest at the heart of the mine, the duo is on the verge of splitting up. But then a trio of treasure hunters challenge Will and Mina, and a poorly aimed pickaxe puts everyone in the mine in danger. As the chambers around them fill with lava and their hunt for treasure becomes a fight for survival, can Will and Mina put their differences aside and work together to escape with their lives? Every chapter of this second installment in the Secrets of an Overworld Survivor chapter book series is packed with adventure-perfect for introducing young gamers to reading! Sky Pony Press, with our Good Books, Racehorse and Arcade imprints, is proud to publish a broad range of books for young readers-picture books for small children, chapter books, books for middle grade readers, and novels for young adults. Our list includes bestsellers for children who love to play Minecraft; stories told with LEGO bricks; books that teach lessons about tolerance, patience, and the environment, and much more. In particular, this adventure series is created especially for readers who love the fight of good vs. evil, magical academies like Hogwarts in the Harry Potter saga, and games like Minecraft, Terraria, and Pokemon GO. While not every title we publish becomes a New York Times bestseller or a national bestseller, we are committed to books on subjects that are sometimes overlooked and to authors whose work might not otherwise find a home.
Visa hela texten

Greyson Mann is the author of the Creeper Diaries series and the Secrets of an Overworld Survivor series from Sky Pony Press. He kept diaries like Gerald's when he was a middle schooler. He kept right on writing through high school and college and now creates books for kids from his home in Madison, Wisconsin. Greyson enjoys playing Minecraft with his nephew, sometimes writes bad rap songs, and hangs out with his three sisters, whom he now adores. Grace Sandford is an illustrator and designer whose clients include Palmer Hargreaves, Stew magazine, Green Android Ltd., and Paper and Apparel. Her books include the two previous books in the Secrets of an Overworld Survivor series; Tough Cookie, written by Kate Louise; and The Egg, which she both wrote and illustrated. She currently resides in Norwich, England.