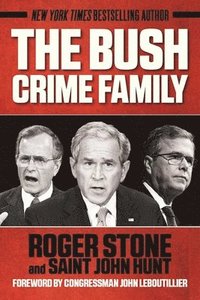 The Inside Story of an American Dynasty

av Roger Stone, Saint John Hunt
Häftad Engelska, 2017-04-11
209
Köp
Spara som favorit
Skickas inom 5-8 vardagar.
Fri frakt inom Sverige för privatpersoner.
Finns även som
Visa alla 1 format & utgåvor
From political insider and New York Times bestselling author Roger Stone, unofficial advisor to Donald Trump, and subject of the documentary Get Me Roger Stone comes a hard-hitting look at a ruthless and flawed political dynasty. Roger Stone smashes through the layers of lies and secrecy that have surrounded and protected our country's most successful political dynasty for nearly two centuries. Here is a blistering indictment, exposing the true history and monumental hypocrisy of the Bushes. In Stone's usual "go for the jugular" style, this is a no-holds-barred history of the Bush family, comprised of smug, entitled autocrats who both use and hide behind their famous name. They got a long-overdue taste of defeat and public humiliation when Jeb's 2016 presidential bid went down in flames. Besides detailing the vast litany of Jeb's misdeeds - including receiving a $4 million taxpayer bailout when his father was vice president as well as his startlingly-close alignment with supposed "enemy" Hillary Clinton - Stone travels back to Bush patriarchs Samuel and Prescott, right on through to presidents George H. W. and George W. Bush to weave an epic story of privilege, greed, corruption, drug profiteering, assassination, and lies. A new preface to this paperback edition features explosive information, including the family's Machiavellian plan to propel Jeb's son George Prescott Bush forward as the family's next political contender. Chapters include: The Preppy Drug Dealer Jeb Bungles Immigration Issue The S&L Scandal Benefits the Bushes Jeb's Shady Partner, Fugitive Miguel Recarey How Jeb Made His Money An Indifference to Ethics Russians and Nazis Make Strange Bedfellows George Herbert Walker Bush (aka "Poppy") Recruited by the CIA? Bush and Watergate The CIA in the '70s The Iran-Contra Quagmire The Pedophile Network Getting Started in the Family Business The Bush Dynasty-Now and in the Future And much more! The Bush Crime Family will have readers asking, "Why aren't these people in prison?"
Visa hela texten

Roger Stone is the author of the New York Times bestseller The Man Who Killed Kennedy: The Case Against LBJ. He has authored numerous other successful titles, including The Making of the President 2016, Jeb! and the Bush Crime Family, The Clinton's War on Women, Nixon's Secrets, The Benghazi Report, and Tricky Dick. He is a legendary political operative who served as a senior campaign aide to Richard Nixon, Ronald Reagan, and Senator Bob Dole, and is a close friend and adviser to President Donald Trump. Stone would parlay being the youngest staff member of the Committee to Re-Elect the President in 1972 into being a conduit of secret memos from Ex-President Nixon to President Ronald Reagan throughout the 80s. A veteran of eight national presidential campaigns, Stone would spend hours talking politics with Nixon as confidant and adviser in his post-presidential years. Stone is known for his hardball tactics, deep opposition research, biting candor, and love of English custom tailoring. Stone serves as mens fashion correspondent for the Daily Caller. Saint John Huntis an author, a musician, and the son of the infamous and legendary CIA covert operative and author, E. Howard Hunt. Saint John spent more than ten years searching for the truth about his father's involvement in JFK's death, resulting in his first book Bond Of Secrecy. In his next book, Dorothy, he explored his mother's life as a CIA spy and her war with Nixon, which resulted in her murder. He lives in South Florida.