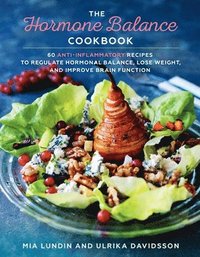 av Mia Lundin, Ulrika Davidsson
Inbunden Engelska, 2018-01-18
289
Köp
Spara som favorit
Finns även som
Visa alla 1 format & utgåvor
Women-we all want to eat right, live healthy, and rid ourselves of hormonal imbalance woes, whether we suffer from premenstrual syndrome (PMS), mood swings, painful periods and cramps, or menopause. And often, we're not careful about what we eat, and our bodies begin to cry for help. Fortunately, the key to achieving hormonal balance is simply eating the right food! Complete with sixty easy and healthy recipes, comprehensive and accessible chapters on the science and facts behind female sex hormones, a list of hormone-friendly foods and their nutrients, and a two-week diet plan, The Hormone Balance Cookbook is an informative and practical guide for every woman. Whether you are twenty-five or fifty-five, learn about the four hormonal phases-from menstruation to postmenopause-and how consuming the right anti-inflammatory foods and vitamins can balance out fluctuating hormone levels to reduce stress and weight gain; mitigate the discomforts of oncoming PMS or menopause; prevent against diseases like osteoporosis; and improve digestion and brain function. Keep your body's nutrients balanced, your hormones happy, your brain alert, your body strong, and your life full-and eat the pain away!
Visa hela texten

Mia Lundin is a nurse practitioner who specializes in gynecology and obstetrics. She ran The Center for Hormonal and Nutritional Balance, Inc. for seventeen years and is the author of Female Brain Gone Insane. Lundin lives in Santa Barbara, California. Ulrika Davidsson is a diet and health expert. She has contributed to twenty-four books, which have sold over a million copies and been translated into twelve languages. She lives in Stockholm, Sweden.