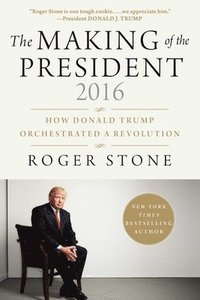 The Making of the President 2016

How Donald Trump Orchestrated a Revolution

"Roger's a good guy. He is a patriot and believes in a strong nation, and a lot of the things that I believe in." President Donald J. Trump "This is the definitive inside account from someone who was with Trump from the beginning." Judge Andrew Napolitano "Breathtaking in its scope and detail, Stone explains how Donald Trump pulled off the greatest upset in American political history." Alex Jones "No one, and I mean no one has a better, more direct and comprehensive view on the rise and rule of Donald Trump than Stone." Dr. Theodore Roosevelt Malloch "We are living in the age of Stone. Indeed his journey from a Dick Nixon 'Dirty Trickster,' to Donald Trump's man in the trenches, does roughly mirror the trajectory of the American right." Variety "Stone has been a colorful and at times maligned figure in the Republican Party who relishes political combat and playing a role in causing or exposing unseemly scandals." Washington Post "Stone is one of the best known and best dressed political insiders in New York." Breitbart.com "Watching Stone is like watching a well-dressed cobra at rest." Esquire "Possibly The Most Dangerous Man In Politics." MSN.com "Trump without Stone is akin to George W. Bush without Karl Rove or Barack Obama without David Axelrod." National Review "What makes Stone such a tour de force is his ability to impact the campaign of both candidates." Redstate.com "Stone is one of the best sources in Washington for 'inside dirt.'" Slate.com Top Amazon Customer Reviews "This excellent book will become the classic resource for future students of the 2016 presidential election." Phillip F. Nelson "I have never seen a more well structured summary of a great historical event." Graham H. Seibert, TOP 500 REVIEWER "Incredible to follow and now revisit such a historical campaign! Stone and fellow patriot talk show host Alex jokes undoubtly propelled President Trump's campaign to a historical victory. Amazing! Stone called it all the way to the end! No wonder the mainstream media didn't want him on their airwaves. Must have for all Trump fans or for anyone wanting to breakout of the left/right controlled media/political paradigm." AnalogElvis "Roger Stone had both the rare opportunity to be at the start of the Trump Revolution and the prescience to record it for posterity. I applaud Mr. Stone on his long career culminating in his participation in one of the greatest political upsets in history. Hat's off to you Mr. Stone!" Franklin Brothers "Roger's books are always an engaging and informative read. This might be his best yet. His longtime professional and personal relationship with Trump makes this the AUTHENTIC tale of 2016 and DJT's longtime presidential ambitions. Stone has been with Trump the entire way. Beware of other books from people claiming to "know" Trump. Looking forward to Stone's next project." Jack Southerlin "Wow. I have to say this is the ultimate Trump book! Roger Stone gives behind the scene details of what happened in the Trump campaign and why he won. I would recommend this book to both the Trump supporter and political news junkie." AmericanPatriot "Surprisingly, this book reaches across the political aisle. Roger certainly doesn't fear controversy - and that shows in his new book. While I don't necessarily agree with many of his political positions/views, THE MAKING OF THE PRESIDENT 2016 is a well-written, compelling political analysis of truly one of the greatest political upsets of all time. While many right-leaning individuals may seek out this book as validation for their views; liberals and left-leaners alike can learn a lot from Roger's insights and analysis. Especially considering how divided our country is at present, it is of paramount importance to acknowledge and respect opposing

Roger Stone is the author of the New York Times bestseller The Man Who Killed Kennedy. He is a legendary American political consultant and strategist who played a key role in the election of Republican presidents Richard Nixon, Ronald Reagan, and George H. W. Bush. He was also instrumental in the 2000 Florida recount responsible for the election of George W. Bush.