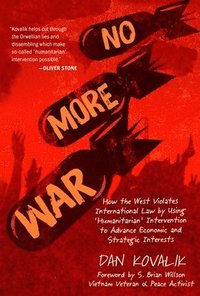 av Dan Kovalik
Inbunden Engelska, 2020-05-14
229
Köp
Spara som favorit
Skickas inom 5-8 vardagar.
Fri frakt inom Sverige för privatpersoner.
"Kovalik helps cut through the Orwellian lies and dissembling which make so-called 'humanitarian' intervention possible." -Oliver Stone War is the fount of all the worst human rights violations including genocide and not its cure. This undeniable truth, which the framers of the UN Charter understood so well, is lost in today's obsession with the oxymoron known as "humanitarian" intervention. No More War: How the West Violates International Law by Using 'Humanitarian' Intervention to Advance Economic and Strategic Interests sets out to reclaim the original intent of the Charter founders to end the scourge of war on the heels of the devastation wrought by WWII. The book begins with a short history of the West's development as built upon the mass plunder of the Global South, genocide and slavery, and challenges the prevailing notion that the West is uniquely poised to enforce human rights through force. This book also goes through recent "humanitarian" interventions carried out by the Western powers against poorer nations (e.g., in the DRC, Congo, and Iraq) and shows how these have only created greater human rights problems - including genocide - than they purported to stop or prevent. No More War reminds the reader of the key lessons of Nuremberg - that war is the primary scourge of the world, the root of all the evils which international law seeks to prevent and eradicate, and which must be prevented. The reader is then taken through the UN Charter and other human rights instruments and their emphasis on the prevention of aggressive war.
Visa hela texten

"Dan Kovalik's No More War could have been titled "No More BS About War" or "Inhumane-itarian Intervention" or "RIP R2P." Kovalik nails it, exposing both the lofty rhetoric of the lawless left and the naked greed of arms dealers profiteering on the vicious Saudi attack on Yemen. Six million Yemeni children at risk of starving to death, Kovalik notes, is a "holocaustal number". This book is a must read and, hopefully, a catalyst to action." Ray McGovern, former CIA analyst, co-founder of Veteran Intelligence Professionals for Sanity (VIPS) "Crucial analysis on our state of permanent war and how we can break the US empire's death grip on humanity." Abby Martin, host of the Empire Files "Dan Kovalik's book exposes the hypocrisy of humanitarian intervention and the danger this imperial framework presents to humanity. This book is essential for understanding the US's routine violations of international law and what we need to understand about them to bring the world closer to a state of peace rather than the endless war forced upon us by Washington's imperial consensus." Danny Haiphong, Black Agenda Report contributing editor, coauthor of American Exceptionalism and American Innocence: A People's History of Fake News from the Revolutionary War to the War on Terror "Kovalik's book is a tremendously valuable contribution to the global struggle for peace and liberation and deserves to be widely read." Morning Star "Hot Books and Skyhorse are publishing essential voices on essential topics, and Salon is very excited to partner with them and to help amplify this important work. We believe in books and we believe that the most important journalism involves the ideas others are too afraid to approach. It's a perfect partnership." David Daley, editor of Salon

Dan Kovalik is the author of critically-acclaimed The Plot to Scapegoat Russia, The Plot to Attack Iran, The Plot to Control the World, and The Plot to Overthrow Venezuela and has been a labor and human rights lawyer since graduating from Columbia Law School in 1993. He has represented plaintiffs in ATS cases arising out of egregious human rights abuses in Colombia. He received the David W. Mills Mentoring Fellowship from Stanford Law School, has appeared on Fox News's The Ingraham Angle, has written extensively for the Huffington Post and Counterpunch, and has lectured throughout the world. S. Brian Willson is an attorney, author, and peace activist. He served as US Air Force Captain during the Vietnam War.