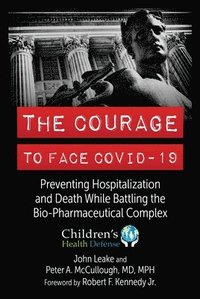 The Courage to Face Covid-19: Preventing Hospitalization and Death While Battling the Bio-Pharmaceutical Complex

av John Leake, Peter A McCullough
Inbunden Engelska, 2022-11-01
361
Köp
Spara som favorit
The story of doctors who developed a safe and effective early treatment for COVID-19 and their battle with the Bio-Pharmaceutical Complex that suppressed it.

At the beginning of 2020, Dr. Peter McCullough was a highly regarded practicing physician, program director, teacher, and clinical investigator at a major academic medical center in Dallas, Texas. When COVID-19 arrived in March, he felt a duty to find a treatment for the disease. He wasn't alone. Other doctors all over the world were also searching for a cure. They followed the longstanding principle that it's best to tackle a sickness early, before it becomes life threatening. This is the story of how Dr. McCullough and his colleagues developed an early treatment protocol of generic, repurposed drugs and supplements that has saved millions of COVID-19 patients from hospitalization and death.

In spite of their success, their early treatment protocol was not welcomed by public health officials. On the contrary, the news of their promising results was dismissed as soon as it was reported. At first this seemed like conventional skepticism, but then fraudulent papers maligning the protocol's repurposed drugs were published in academic medical journals. This and other acts of fraud revealed that a coordinated smear campaign against early treatment was being waged. Dr. McCullough and his colleagues soon found themselves censured, censored, attacked in the media, and fired from their jobs. The greatest victims of the smear campaign were COVID-19 patients who were consequently deprived of early treatment. Hundreds of thousands needlessly died of the disease.

At the same time early treatment was suppressed, the US government and mainstream media proclaimed that the cure to COVID-19 lay in a new generation of vaccines that were being developed at warp speed. These were heralded as a forthcoming panacea that would save mankind and restore normalcy. As soon as they were mass deployed, public health officials would lift the restrictions on social and economic life.

While many observers were thunderstruck by this turn of events, there were historical precedents. In his 1961 Farewell Address, President Eisenhower warned: We must guard against the acquisition of unwarranted influence, whether sought of unsought, by the military-industrial complex. The potential for the disastrous rise of misplaced power exists and will persist. We must never let the weight of this combination endanger our liberties or democratic processes. As Dr. McCullough and his colleagues learned, Eisenhower's warning has become equally applicable to the Bio-Pharmaceutical Complex of multinational drug companies, the NIH and other federal agencies, research and virology labs, and the Gates Foundation. Since COVID-19 arrived, this Complex has obtained misplaced power over every aspect of our lives and taken our liberties. The Courage to Face Covid-19 recounts how Dr. McCullough and his colleagues began their work by fighting a novel infectious disease, and then became leaders in fighting the tyrannical regime that endangers our American way of life.
Visa hela texten