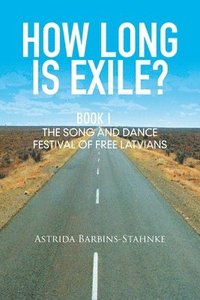 How Long Is Exile?

Book I: the Song and Dance Festival of Free Latvians

av Astrida Barbins-Stahnke
Häftad Engelska, 2015-10-23
189
Köp
Spara som favorit
Skickas inom 5-8 vardagar.
Fri frakt inom Sverige för privatpersoner.
Finns även som
Visa alla 2 format & utgåvor
The novel How Long Is Exile? because of its length had to be divided into two books: I-The Festival of Song and Dance and II-Going Home. The novel is about the Latvian people who suffered in and around World War II, as the two major world powers-Communist Russia and Nazi Germany-converged in fierce battles on the Amber land at the Baltic Sea until it was conquered by one, then the other, and again by the first, and its two million people were as if sliced up in many parts and scattered throughout the world. Divided with each part longing for the other, the nation survived the hot and cold wars, keeping the hope of freedom and the return home alive. That hope was nurtured in ethnic communities and especially enforced at supplemental schools and festivals. As a portion of refugees spun off and assimilated in their various host countries, a large remnant remained and kept the flame of freedom alive. This was no easy and cheap task. It called for dedication, sacrifice, money, and courage. It was watched and monitored from within and without for half a century until, in 1990, the Soviet Union collapsed, the Iron Curtain and the Berlin Wall fell, and the euphoria touched every East European country.

As a participant in that so-called exile state, I began writing my version of the experience after the Milwaukee festival, filtering it through the consciousness of my main character Milda Brzia-Arjs, who, coming out of mourning for her husband, Krlis Arjs, arrives at the festival, ready to turn a new leaf in her life. During the four days with like-minded people, interesting events, and common recollections of her childhood, the war and postwar experiences in a displaced persons' camp flash before her in a swirling kaleidoscope and, at the end, throws her in the direction she did not plan to go.

Book I ends there. It is a meditative, reflective life-based fiction that probes deeply into Milda's psyche and also of other characters who travel the journey with her. Through Milda's thoughts and actions, we see that the lasting impact of war and how it branches out and goes on onto the third and fourth generations.
Visa hela texten