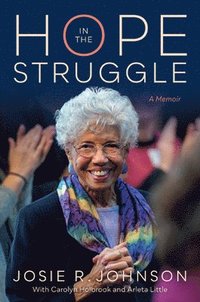 Hope in the Struggle

av Josie R Johnson, Arleta Little, Carolyn Holbrook
Inbunden Engelska, 2019-03-26
209
Köp
Spara som favorit
Skickas inom 5-8 vardagar.
Fri frakt inom Sverige för privatpersoner.
How a Black woman from Texas became one of the most well-known civil rights activists in Minnesota, detailing seven remarkable decades of fighting for fairness in voting, housing, education, and employment Why do you continue to work on issues of justice? young Black people ask Josie Johnson today, then, perhaps in the same breath, How do you maintain hope? This book, a lifetime in the making, is Josie's answer. A memoir about shouldering the cause of social justice during the darkest hours and brightest moments for civil rights in America-and, specifically, in Minnesota-Hope in the Struggle shines light on the difference one person can make. For Josie Johnson, this has meant making a difference as a Black woman in one of the nation's whitest states. Josie's story begins in a tight-knit community in Texas, where the unfairness of the segregated South, so antithetical to the values she learned at home, sharpened a sense of justice that guides her to this day. From the age of fourteen, when she went door to door with her father in Houston to campaign against the Poll Tax, to the moment in 2008 when, as a delegate at the Democratic National Convention, she cast her vote for Barack Obama for president, she has been at the forefront of the politics of civil rights. Her memoir offers a close-up picture of what that struggle has entailed, whether working as a community organizer for the Minneapolis Urban League or lobbying for fair housing and employment laws, investigating civil rights abuses or co-chairing the Minnesota delegation to the March on Washington, becoming the first African American to serve on the University of Minnesota's Board of Regents or creating the university's Office of the Associate Vice President for Academic Affairs with a focus on minority affairs and diversity. An intimate view of civil rights history in the making, Hope in the Struggle is a uniquely inspiring life story for these current dark and divisive times, a testament to how one determined soul can make the world a better place.
Visa hela texten

"Josie R. Johnson has always been a champion of fairness and decency, and this book shows us that while there is still work to be done, with her help, there will always be hope."-Walter Mondale "Like other institutions, like our society, like human life itself, universities are based on hope-on the belief that a struggle is worth it and that it can, and will, be won. Once in a while, someone comes along to help a university define hope in the midst of struggle. Dr. Josie Johnson, my admired colleague Josie, helped teach a generation of us at the University of Minnesota that the struggle for human and civil rights is worth it and that it can-and will-be won. Yes, she always taught us that there is 'hope in the struggle'!"-Nils Hasselmo, former president, University of Minnesota "Dr. Josie Johnson's memoir poignantly captures nearly sixty years of the struggle for Civil Rights between 1950 and the election of President Barak Obama in 2008. Written from the perspective of a community activist, parent, scholar, and university administrator, Johnson has articulated well the issues confronting the movement for social justice in the United States. The breadth of her political contacts and the impact of her life's work are breathtaking. This is a must read for those interested in American social history."-David Vassar Taylor, former dean, General College of the University of Minnesota "This is a must read for civil rights historians, public policy practitioners, women advocates, and anyone looking to be inspired. It chronicles Josie Johnson's lifelong commitment to the struggle of the Black community to triumph over racism and discrimination. She gives us a more intimate understanding of the motivation behind her courageous work in Mississippi, at the Urban League in north Minneapolis, and at the University of Minnesota. Hope in the Struggle reminds us of the power of faith, the promise of hope, and the resilience that stems from love. Thank you, 'Mama Josie,' for sharing your love of family and community with all of us."-Sharon Sayles Belton, former mayor of Minneapolis

Bloggat om Hope in the Struggle

Born in 1930 in San Antonio, Texas, Josie R. Johnson has been an educator, activist, and public servant for more than seven decades. Along with her work for the Urban League and the University of Minnesota, she has been office manager, campaign manager, and chief of staff for multiple political campaigns and public officials, including campaign manager for the first African American lieutenant governor of Colorado, and co-chair of the African American DFL Caucus in Minnesota. She holds degrees in sociology, education, and education administration. She lives in Minneapolis and continues to serve her community, advocating for equal rights and social justice. Carolyn Holbrook is a writer, educator, and former program director of the Loft Literary Center. She teaches creative writing at Hamline University and is author of Ordinary People, Extraordinary Journeys, which profiles twenty community leaders and programs made possible by Leadership Initiatives in Neighborhoods. In 2010 she received the prestigious Kay Sexton Award presented by Friends of the St. Paul Public Library. Arleta Little is director of Artist Fellowships for the McKnight Foundation. Prior to working in philanthropy, she was executive director of the Givens Foundation for African American Literature.