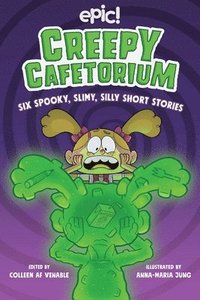 av Colleen Af Venable, Joe McGee, Paul Ritchey, Nick Murphy, Shelby Arnold
Häftad Engelska, 2021-11-25
100
Köp
Spara som favorit
From Epic Originals comes a collection of illustrated stories serving up spooky thrills and plenty of laughs. When the lunch bell rings at Newville Elementary, you can bet that things are about to get WEIRD! Welcome to the Cafetorium! It's a cafeteria, a gymnasium, and possibly a portal to a world where cube-shaped mashed potatoes are plotting against the almost-definitely-robotic lunch staff. Join Liz Dawson, Declan, Remy, and the rest of Newville Elementary as they learn that when you have plans in the Cafetorium, the Cafetorium has plans for you, too! Each offbeat tale focuses on a different Newville Elementary student, giving readers a chance to walk in another kid's slightly wacky shoes. Funny, unexpected twists in each story provide readers with subtle lessons about honesty, consequences, self-acceptance, and more.
Visa hela texten

Colleen AF Venable is the author of the National Book Award long-listed Kiss Number 8, a graphic novel co-created with Ellen T. Crenshaw. Her other books include Mervin the Sloth is About to Do the Best Thing in The World with Ruth Chan, The Oboe Goes Boom Boom Boom with Lian Cho, and the Guinea Pig, Pet Shop Private Eye series, illustrated by Stephanie Yue and nominated for the Best Publication for Kids Eisner. Joe McGee teaches creative writing at Sierra Nevada College. An avid cartoonist, board game player, and role-playing gamer, Joe is also the author of the Junior Monster Scouts chapter books series and three picture books: Peanut Butter & Brains, Peanut Butter & Aliens, and Peanut Butter & Santa Claus. He lives in the mountains of West Virginia with his wife (also a children's author) and their puppy, Pepper. Visit joemcgeeauthor.com for more information. Paul Ritchey is a filmmaker and web host living in Philadelphia. He hosts a weekly gaming comedy show. He also performs on Pretend Friends, an actual-play tabletop role-playing radio show. Paul is incredibly fast. So fast, in fact, that he appears to be standing still. Nick Murphy is a filmmaker who cohosts the tabletop role-playing podcast Pretend Friends. He also produces and cohosts a gaming series on YouTube. He's a graduate of the film/digital video program at The University of the Arts. To Save Christmas, a short film he co-directed with his writing and producing partner, Paul Ritchey, won the award for best short at the 2016 First Glance Film Festival. Nick enjoys the 80s, time travel, Star Wars, and being colorblind. He lives in Philadelphia with his wife, artist Rebecca Chewning, and their awesome son, Desmond. When not bingeing old Twilight Zone episodes, Marcie Colleen is busy writing children's books. She is the author of numerous titles, among them Love, Triangle, Penguinaut!, The Bear's Garden, and the Super Happy Party Bears chapter book series. She lives in San Diego, California. Visit her at www.thisismarciecolleen.com.